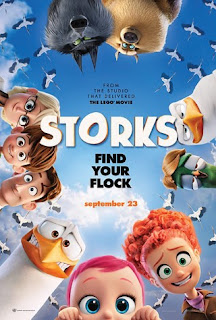 Do storks deliver? Well they do in this film! Will millions flock to see this crazy flick? That remains to be seen. But, enough puns. The truth is “Storks” is hilarious from beginning to end, totally exceeding my expectations. This may be the first animated movie from Writer/Producer/Director Nicholas Stoller but it is clear he applied the sense of humor and antics used in the direction of Neighbors (2014). Coupled with animator and director Doug Sweetland who is known for blockbusters such as Toy Story and Monsters Inc. and you have a perfect recipe for the quality entertainment Storks provides.

The concept of storks delivering packages from a global Internet giant Cornerstore.com is extremely clever well adapted to the overall plot; which thickens when the top delivery stork, Junior, activates the baby making machine. With his preordained promotion on the line Junior must deliver an irresistible little girl before his boss is any the wiser.

Andy Samberg is Junior and carries over a similar performance as he did when he was Jonathan from 2012s Hotel Transylvania. But Junior is not alone. The only human on Stork Mountain, Tulip joins the quest. Katie Crown is Tulip and her portrayal is reminiscent of Harley in TV animated comedy series Bobs Burgers.

In any good plot of this type there is always a nemesis. He goes by the name of Pigeon Toady and while this is Stephen Kramer Glickman’s first animated film he pulls the character off without a hitch. With comedian Steven Wright-like dry humor there’s little time to recover between laughs. Prior to this he was best known for his role as Gustavo Rocque on the Nickelodeon series Big Time Rush.

In all honestly, I do not think that casting for the characters voices could have been any better. Other well known’s include Kelsey Grammar of Cheers fame as Hunter, the Executive CEO of Cornerstore and Jennifer Aniston of Friends fame as Sarah Gardner, a prime figure in what is yet another twist to this crazy adventure. The last time Aniston used her voice was in 1999s The Iron Giant, playing a similar character.

This film has multiple interwoven plots that don’t confuse and in the end will ultimately reveal how storks are capable of restoring myth while enlightening everyone on Stork Mountain their true purpose in the world.
Posted by Michelle Libby at 10:26 AM