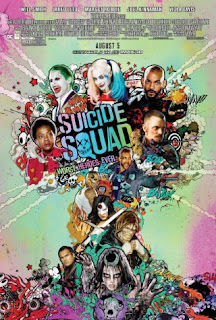 We all know that modern day Hollywood is defined by a seemingly endless onslaught of comic book movies with Suicide Squad being the fifth to be released this year alone. That being said, this film is unique in the sense that it focuses on a team of supervillains as opposed to heroes that we have grown accustomed to. Like many others, I was very excited for this movie due to that, as well as a pretty awesome marketing campaign of original posters and interesting trailers. This follows 2013’s Man of Steel and this year’s Batman v Superman as the third installment in the new DC Extended Universe. As awesome as Marvel movies are, I have always preferred DC’s characters and am excited to watch them come back to life on the big screen over the course of the next couple of years.

A decent amount of this movie is shown in flashbacks as a storytelling method of efficiently introducing us to all of these characters, particularly early on in the film. Some critics have bashed the movie for this, considering it a quick and lazy method of filmmaking. However, I did not have an issue with it whatsoever, and I really thought that it was the best way they could have made this movie work.

Anyways, Viola Davis portrays Amanda Waller, an operative of a secret government agency that is recruiting a handful of supervillains from prison. Ultimately, the so called “Suicide Squad” operates as a team of mercenaries and is sent on a dangerous black ops mission to destroy a new threat with the capability of destroying our planet.

While this comes off as a cliché storyline, I can honestly say that it worked for me and I had a great time watching Suicide Squad. The movie reminded me of this year’s Deadpool in the sense that it took a more lighthearted, humorous approach to this now overused genre of filmmaking.

As mentioned before, I love watching DC Comics on the big screen and I thought that they nailed down just about everyone in this large cast of characters. Some standout performances for me include Will Smith as Deadshot, Margot Robie as Harley Quinn and Jared Leto as the Joker. On a final note, even Jai Courtney was great as Boomerang, which blows my melon considering he played a huge part in ruining the Die Hard and Terminator franchises . . .