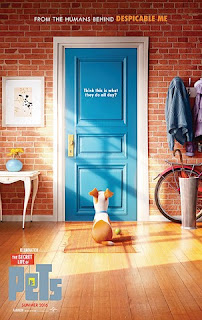 Have you ever gone to the movies based on the preview or trailer, only to find that these clips were the only highlight once you are seated? Well such is the case with ‘Pets”. Yes there are twist and turns to the plot but they are too obvious. Taken into effect that this critique is coming from an adult, where does that leave you in making your own decision to see this film? Well if you are a huge fan of the Minions and Dr. Seuss than by all means indulge yourself. Directors Yarrow Cheney and Chris Renaud are both known for being the production designers for animated films Despicable Me 2 (2013) and Lorax (2012). Writers Cinco Paul and Ken Daurio was also a contributor to the Despicable Me films.

To me this was more about a family reunion of animated artists than it was producing a film with substance. During scenes which should normally incite laughter was only replaced by silence.  All this being said I suppose there is room for giving praise for at least the choice of casting. Among other things Louis C.K. is a comedy writer, so it would seem natural for him to be the voice of a terrier named Max. His life as a favorite pet is turned upside down, when his owner brings home a sloppy, stray mongrel named Duke (Eric Stonestreet in his first animated gig) whom Max immediately resents. You may recognize Eric is Cameron Tucker on TV’s Modern Family.

Just off his role as Calvin Joyner in the very recent Central Intelligence Kevin Hart lends his voice to Snowball. I also have to admit the setting for the antics of these pets is perfect. It takes place in a Manhattan apartment, spills into the streets and the sewer system, the home of Snowball and his constituents. This comes as a result of the “Pets” eventually having to put their quarrels behind them after discovering that this white bunny (Snowball) is assembling an army of non-owned pets determined to take revenge for their situation. In her third animated film Jenny Slate (Bellwether in Zootopia) is Gidget who has a crush on Max and eventually leads her own revolt.

In conclusion, I have to say that being a huge fan of animated children’s films I was surprisingly disappointed.
Posted by Michelle Libby at 11:39 AM