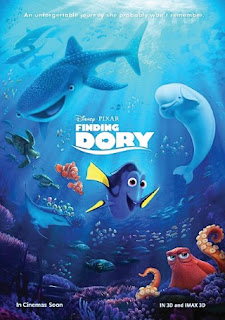 Finding Dory is a new animated movie and sequel to the 2003 beloved original, Finding Nemo. In addition, it comes as the seventeenth full-length animated film from Pixar Animation Studios. Like many people of my generation especially, I have seen just about all of these movies over the course of the years. It seems as if the company can do no wrong, as many of these films are viewed as masterpieces of animated storytelling, appealing to all age groups. A few of my favorites are Monsters, Inc., the Toy Story trilogy, and more recently, 2015s Inside Out. Finding Nemo would be right up there as well, being one of the most emotionally powerful stories to ever come from Pixar. All of that being said, I was very excited and had fairly high expectations for this long awaited sequel.

Although this film was released over a decade after the original, the main storyline picks up just a year later. As the title clearly suggests, Dory (once again voiced by Ellen DeGeneres), sort of takes the reigns as the main character this time around. Dory suffers from short memory loss, as most of you may remember (no pun intended) from Finding Nemo. However, she does know that she was separated from her parents sometime in the past. Without giving too much away, Dory goes off on a quest to find them with the help of Nemo, Marlin and a variety of other aquatic friends.

As with every other project by Pixar, I had a blast watching this movie. While it is seemingly targeted at a younger audience, I found myself laughing out loud at quite a few clever moments. Pixar is a master of appealing to everybody and it is on full display yet again with this film. As with all of their work, the animation was absolutely flawless and amazing to watch. The combination of the new and returning voice cast all did exceptional work, particularly Ellen in her iconic title role. While it is mostly an uplifting and fun movie, there are more than a few heartfelt moments that nearly had me tearing up.

Overall, I wouldn’t say that this surpassed the sky high standards of the classic Finding Nemo, but that is hardly an insult. I think that Finding Dory is another excellent Pixar film that does a great job of expanding on the story of its predecessor.
Posted by Michelle Libby at 10:34 PM