Six years ago Tim Burton’s interpretation of the spectacular underworld came to life on the silver screen. Now Director James Bobin joins the long list of directors bringing his own version to the big screen. Fortunately for us it includes most, if not all, of the same all star cast. So, need I really even begin to mention them? Yes, Yes, I do; just in case you have been since living in your own rabbit hole. But before I do I must give credit to screenwriter of Maleficent (2014), Linda Woolverton who returns to add to the new twists and turns from the original novel by Lewis Carroll that will keep you guessing without losing focus. 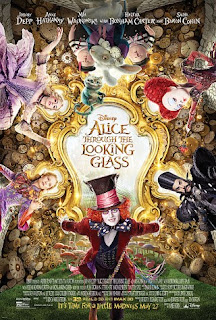 Alice Kingsleigh (Wasikowska) has spent the past three years following in her father’s footsteps as a sailor of the high seas. She returns to London only to find that Hamish Ascot (Leo Bill) has deviously acquired her father’s business as payback for her rejection to marry him. Upon her retreat to another room in frustration and anger she is then summoned to a magical looking glass with the help of none other than Absolem (Rickman).

It is here Alice returns to the whimsical realm of Underland she is reunited with her friends the White Rabbit (Sheen), the Cheshire Cat (Fry) and of course the Mad Hatter (Depp), who as it happens is not himself. He has lost his Muchness, so The White Witch Mirana (Hathaway) sends Alice on a quest to borrow a Chronosphere, the mechanical device inside the chamber of the Grand Clock which powers all time. Returning to the past, she will come across friends as well as enemies at different points in their lives while embarking on a perilous race to save the Hatter before it is too late and time runs out.

Oscar nominee and Golden Globe winner for Borat, Sacha Baron Cohen assumed the role of a new villainous character named Time. The numerous never ending references and clichés to the clock were welcome and hysterical in context. Cohen is brilliant, period. But he doesn’t steal the show. All of your favorite characters continue to entertain and with the new plot are flawless. The “Looking Glass” gives hope and even a future to sequels in general. I will even go out on a limb to say that I enjoyed this movie more than the first installment.