In typical Melissa McCarthy fashion, she headlines The Boss in a slapstick, outrageous comedy about an industry mogul who is sent to prison for insider trading and has learn to adapt to being penniless. When she leaves prison she is ready to remake herself as a beloved citizen. Some of the people she did not get along with are not quick to forgive and forget what she did in the past. 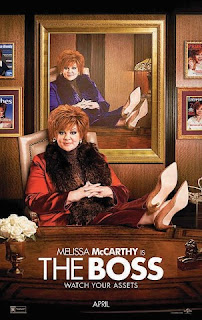 In the movie, McCarthy moves in with her former secretary (Bell) sleeping on her sofa bed a new experience for the rich socialite. McCarthy becomes close with Bell and her daughter. The daughter is enrolled in a group similar to the Girl Scouts which sells cookies to neighborhoods.

McCarthy goes with the daughter to a meeting and decides she can create a business model to market to the same crowd, but with brownies. She plans to give the kids commissions and matches it towards a future college education. She goes all in drawing up plans for helping the brownies succeed and takes Bell on as her co-business owner.

McCarthy goes head to head with the cookie leader (Annie Mumolo) and they do not get along.

McCarthy gets into a fight with Bell in the end and decides to sell her business to another person, but has a change of heart and decides to not get rid of the company.

There is a childish fight scene and a stupid break-in scene. Over all, the movie is funny, but profane and not recommended for younger children to see.

There is a lot of extreme crude sexual content. I would not recommend this movie to the senior generation or for kids in high school or younger. If you are looking for a good date night laugh at a stupid movie this is the movie for you.
Posted by Michelle Libby at 2:00 AM No comments:

When Henry first wakes up, he’s got a list of things he’s missing: An arm, a leg, his voice and his memories. He gets his limbs back – in the form of some robotic appendages – and the woman helping him claims to be his wife, but his voice is out of commission for the duration of the movie. Before his life can settle into some semblance of normal, however, a man known only as Akan arrives, declaring that Henry is the key to his plans of world domination. The rest of the film is a fast-paced struggle as Henry attempts to rescue his wife from her hostage situation. 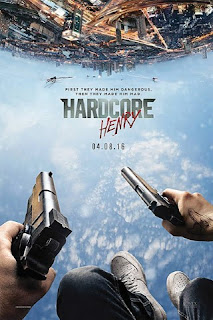 The best thing that Hardcore Henry has to offer is its unique perspective. Imagine something like a James Bond film, but with more parkour, and with a GoPro strapped to the protagonists face. The movie was filmed entirely from the viewpoint of various stunt doubles, which made the fight-scenes all the more vivid and intense. This first-person point of view was refreshingly original, and only served to enhance the movie’s action.

Unfortunately, there were some downsides to this technique as well. For example, there are points were it looks too much like a video game. In a couple scenes, I noticed the special effects suddenly melted away, as though the producers had run out of money before they’d completed the movie and had to scrap together some final scenes. Additionally, the camera’s constant bobbing made the movie hard to follow at points, and my eyes felt like they had whiplash upon leaving the theater.

The worst thing about Hardcore Henry is easily the plot, which makes little to no sense. To add insult to injury, the storyline is about as overused as they come: Remarkable hero is forced to save a loved one from a nefarious villain with plans to take over the world. In fact, the villain is so ridiculous I almost thought he was meant to serve as satire for over-the-top antagonists. But no, Hardcore Henry seems to be taking itself pretty serious on this one. He’s crazy, he’s albino, and he’s got telekinesis. Why this man even needs a cyborg army is beyond me. Why he needs Henry is even further beyond my capabilities to fathom.

Without a leading actor, the film was mostly carried by Sharlto Copley, whose character served as Henry’s guide throughout the movie. His erratic role in the movie actually complimented the absurdity around him nicely, and I think the film would have really suffered without him. I was also pleasantly surprised by the appearance of Tim Roth, who appeared very briefly in the form of flashbacks.

Flaws aside, I actually kind of enjoyed Hardcore Henry. It certainly won’t be winning any Golden Globes, but then again, that’s not the type of movie I was expecting to see. Instead, I got nonstop action set to a techno beat, and I’m perfectly okay with that. If nothing else, it’s a mindless action flick to loosen up with.

Viewers be warned, this film is rated R for a reason; profanity, sexual content, cringe-inducing violence, the works. It’s definitely not for the squeamish or the faint of heart – the intro alone made me feel a little woozy. But if you’re into brain-numbing violence without a plot, look no further! Hardcore Henry is the film for you.
Posted by Michelle Libby at 2:00 AM No comments: 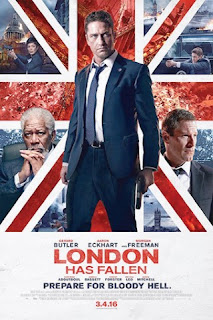 In the action packed sequel to Olympus Has Fallen, Mike Banning (Gerard Butler) and President Benjamin Asher (Aaron Eckhart) are teamed up once again in a life or death struggle to keep the President alive from extremists who want to exact their revenge on him.

In an elaborate plan that took two years to organize, all of the world leaders gather in England for the funeral of the British Prime Minister. It was claimed to be the safest city in the world at that event, but it was not so.

The action was non-stop once wheels were down in Britain. The beginning kept us guessing as to when things would start blowing up and once they did…it didn’t stop.

Much of London was destroyed, but certain landmarks were left standing, leading to the question, why? What makes them so special?

Many of the characters returned from the original movie. Melissa Leo as the Secretary of Defense, who in my opinion should have retired after the first movie where she was beat to within an inch of her life. Angela Bassett returns as Lynn Jacobs and Morgan Freeman returns as the Vice President who takes command of the country and the rescue mission.

Unlike some action adventure movies, this one was punctuated with zingy one-liners that kept the action from becoming all encompassing. There were many laugh-out-loud moments.

Alon Abutbul played Aamir Barkawi, the evil bad guy. The casting in the film was spot on.
I was impressed with some of the neat ways that communication happened between London and the United States.

The missing element in this movie for me was the romance. In the first one, Banning was trying to win back his wife. In this movie, they were happy together and although we were kept wondering if he’d make it home to his family, it was missing the spark of romance for the women in the audience. It’s Gerard Butler…we expect some of that.

All in all it was a fun action movie if you don’t pick at too many of the details, like how crazy it is to put all of the world leaders in one place. Can you say “target”? Also, why did some of the leaders not run when things started blowing up?

We saw the movie with friends who hadn’t seen the first one and although it isn’t necessary, it helps with the continuity and bits of dialogue that reference the first movie.

I would see this movie again, mostly for the one liners and the dynamic duo of Butler and Eckhart.
This being an election year, I also had the thought during the movie, how would Bernie Sanders get himself out of a jam like this one?

Batman v Superman: Dawn of Justice is a new comic book film that follows 2013s Man of Steel as the next installment in the DC Extended Universe. Once again directed by Zack Snyder (Watchmen, 300) this film hosts an all-star cast featuring Ben Affleck, Henry Cavill, Amy Adams, Jesse Eisenberg and Gal Gadot amongst others. It is worthy to note that this is completely separate from Christopher Nolan’s Dark Knight Trilogy with Ben Affleck portraying a whole new incarnation of the Caped Crusader. Needless to say, as a big fan of comic book films in general, I was very excited to see the two most famous superheroes of all time face off in their first live action film together. 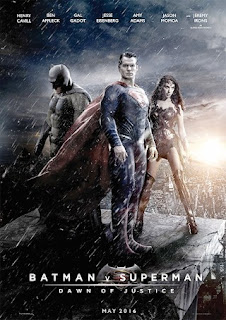 The movie begins with a brief montage of Batman’s early life while going on to show Bruce Wayne (Ben Affleck) witnessing the destruction of Metropolis by Superman (Henry Cavill) and General Zod (Michael Shannon) fighting at the end of Man of Steel. Because of these events, Superman has become the most controversial figure on the planet. Some view him as a god and a symbol of hope, while others see him being dangerous to all of humanity. Batman is one of the people who views Superman as a threat and decides to take it upon himself to defeat him once and for all. Meanwhile, Lex Luthor (Jesse Eisenberg) has been working on creating Doomsday, a monster who poses yet another threat to mankind. Now Batman and Superman must make peace with each other and team up with Wonder Woman (Gal Gadot) in order to save our planet.

Overall, I had a blast watching this movie. Like all of Zack Snyder’s work to date, the movie looked amazing and had mind boggling visual effects; the guy proves yet again that he knows how to bring a comic book to life. In addition, I loved watching Ben Affleck embody the role of an older Batman/Bruce Wayne and thought he played each part perfectly. In my opinion, his scenes were the best parts of the film. All of that being said, my biggest complaint with this movie is that it had a bit too much going on and really struggled to find its pacing. Putting that aside, Batman v Superman is still worth seeing for the absurdly entertaining action, especially the epic titular throwdown that we have all been waiting for.
Posted by Michelle Libby at 2:00 AM No comments: