Whiskey Tango Foxtrot is a comedy that takes place in 2002 Afghanistan. It is about a news reporter named Kim Barker, who feels like she is moving backwards in her life, and wants a new challenge. The challenge ends up being a few years in Kabul, chasing stories, relationships and air time. 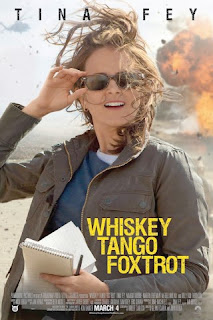 Tina Fey is very good in this laugh-out-loud movie. The cast, including Margot Robbie and Martin Freeman, do an amazing job at balancing the war time seriousness with just enough humor to make an enjoyable movie for all the adults. I say adults because it is rated R, and sex, alcohol use and slurs are sprinkled throughout the film.

It starts with a quick bang, literally, as Kabul is bombed, and the house full of foreign reporters jumps into action and we see Kim Barker (Tina Fey) reporting in the mists of all the chaos. Then we jump back to see what has led her into such a situation. Before long she’s saying goodbye to her long term boyfriend and is flying to Afghanistan. Once there she is introduced to her translator Fahim Ahmadzai (Christopher Abbott) and is introduced to the Afghani culture. After a few months she learns that her boyfriend back in America is cheating on her, and she decides to turn a new page. She also meets another reporter, Iain MacKelpie (Martin Freeman) who she sleeps, and then falls in love, with. As this is going on, she is also interviewing powerful men in the country, including Ali Massoud Sadiq (Alfred Molina) who eventually tries to sleep with her, and she responds with a bit of blackmail to help save Iain. There is one thing Kim has to remember though; the Kabul effect isn’t real, and all the partying, alcohol, violence and war shouldn’t be and isn’t normal.

Overall I really liked this film. It was funny and happy, and a bit real at times. This is a movie set in a place of turmoil, but still had a light feeling and it didn’t take itself too seriously.
Posted by Michelle Libby at 1:36 PM