The Hunger Games: Mockingjay - Part 2 is the fourth and final installment of The Hunger Games film series based off the popular trilogy of books by Suzanne Collins. As with many other book-to-movie franchises, the concluding chapter of this dystopian science-fiction story was split into two separate parts. Personally, I thought that Part 1 was a pretty decent movie, but it definitely suffered a little bit from being the build up to the final act. Having said that, I was really hoping that Part 2 would deliver an epic sendoff to the blockbuster saga. In the end, I thought that this movie didn’t quite live up to its high expectations, but it was still a satisfying conclusion to what has become an absolute global phenomenon. 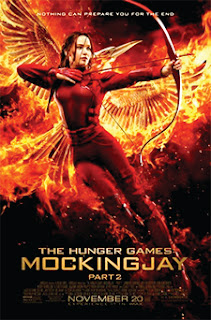 To no surprise, the impressive cast of the previous films returned for this finale including: Jennifer Lawrence, Josh Hutcherson, Liam Hemsworth, Woody Harrelson, Julianne Moore, Donald Sutherland and the late Phillip Seymour Hoffman. With so much going on in the plot twisting story of this climatic final chapter, I will keep my summary short and sweet. Obviously, this movie picks up right after the cliffhanger ending to Part 1. Taking place in the futuristic continent of Panem, the war between the corrupt Capitol and the rest of the districts has finally come. Now it is up to Katniss Everdeen (Jennifer Lawrence) to fully embody her leadership role in the rebellion and overthrow President Snow (Donald Sutherland) once and for all.

Overall, I had a pretty enjoyable time watching this movie. Being the final chapter of a blockbuster series of this level, big time special effects and climatic action sequences are practically a given, and this film certainly had plenty of each. It made for a pretty entertaining movie that also had some quality acting, particularly from Jennifer Lawrence in the lead role.

However, I think the one glaring issue with this film is the pacing of the story. Similarly to its predecessor, there are more than a few moments when this movie just loses steam and drags on. I think this goes to show that it was really unnecessary to break this final chapter into two parts, as a single, fast paced film would have been more effective. Putting that aside, The Hunger Games: Mockingjay - Part 2 is still a quality time at the movies that should satisfy fans of the franchise.
Posted by Michelle Libby at 2:21 PM