Jupiter Ascending is a new action/adventure fantasy film written, produced and directed by the famous Wachowski brothers (The Matrix trilogy, V for Vendetta). The movie features a solid cast starring: Mila Kunis, Channing Tatum, Sean Bean and Eddie Redmayne. With the Wachowksi’s at the helm, I knew that I would be in for a visually impressive experience that would most likely feature some quality action. 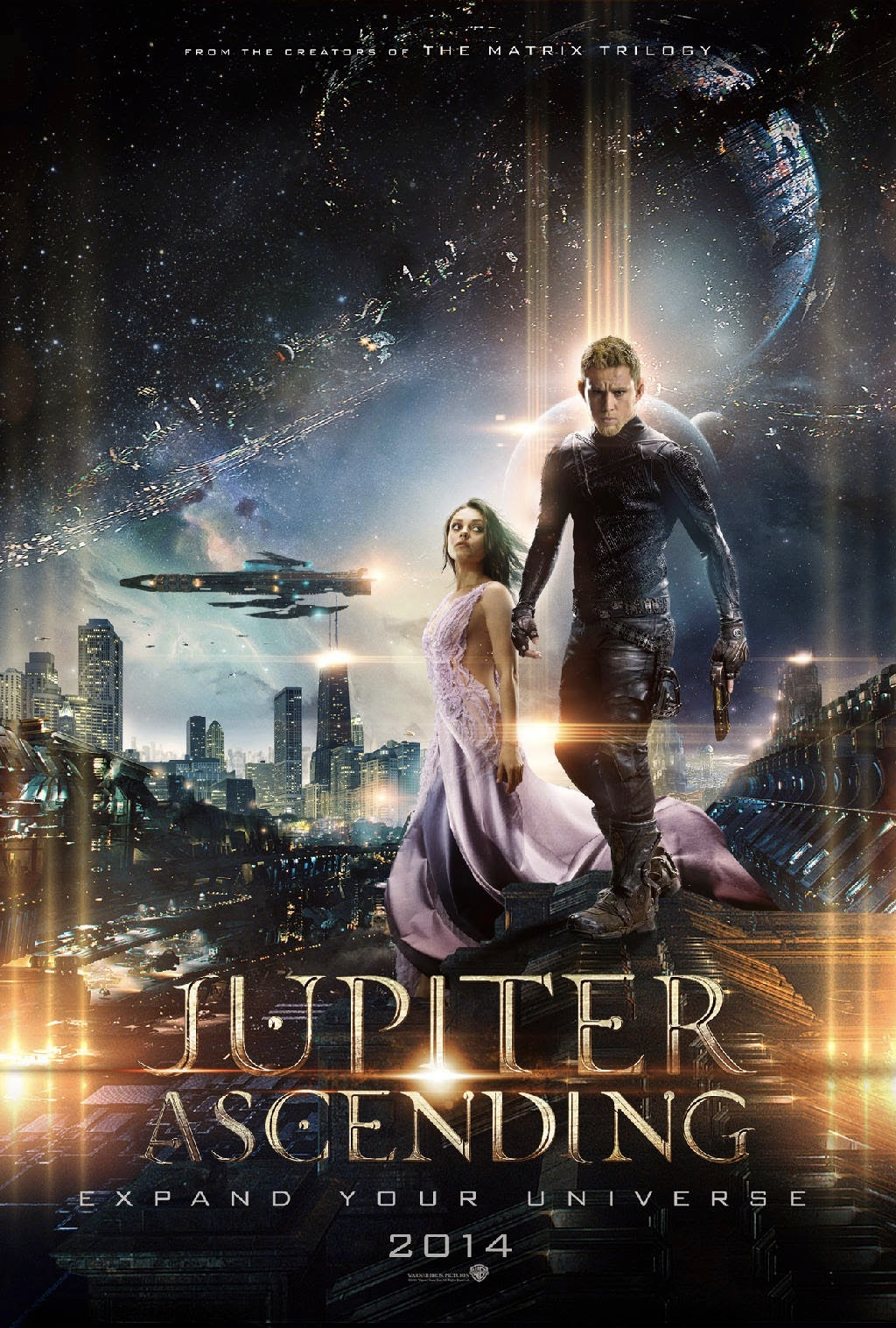 However, one of the main reasons why I wanted to see this movie was because of Warner Bros. rumored premier of the teaser trailer for the upcoming 2016 film, Batman v Superman: Dawn of Justice.

Unfortunately, that was a letdown and it seems as if we will have to wait just a little longer for that to come along. Putting that aside, Jupiter Ascending was actually pretty entertaining for a big budget action movie released in February.

Jupiter Jones (Kunis) is a young maid living in Chicago, who repeatedly tells the audience how she is not particularly happy with her life. However, from birth, it was predicted that Jupiter was destined for great things. Little does she know that her genetics entitle her to an unbelievable power that could alter the balance of the universe as well as the fate of our planet. One day, Jupiter is met by a genetically engineered interplanetary warrior named Caine (Tatum) who tells her about all about her true destiny. In order to confront her own fate, Jupiter travels with Caine so they can end the current tyrannical reign of a powerful alien dynasty.

Although the story was somewhat hard to follow and even a little boring in parts, overall I had a pretty good time with this movie. As with all of the Wachowski’s work, the visual effects were very impressive and simply put, the movie just looked very good. The action scenes were very exciting too, but I just wish that there were a few more of them. Even though the movie’s cast is fairly impressive, the acting performances they delivered were nothing special. However, I did really like Channing Tatum’s character Caine and his antigravity flying boots were perhaps the coolest feature of this movie. The Wachowski’s may never live up to the legendary status of their original Matrix movie, but I must say that Jupiter Ascending is much better than some of their more recent work and exceptionally entertaining for a February blockbuster.
Posted by Michelle Libby at 10:35 PM No comments:

Book Review of Looking for Alaska by John Green. Review by Nick McGoldrick 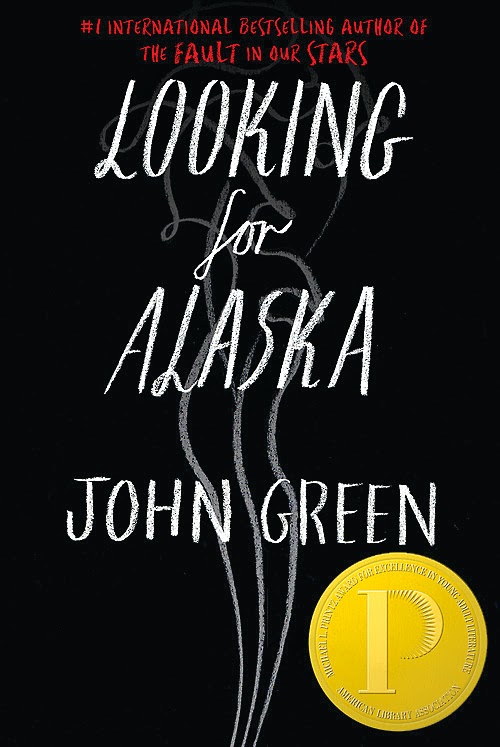 Over the last decade, John Green has impressed readers with a refreshingly new take on modern fiction, including works like The Fault in Our Stars, Will Grayson, Will Grayson (with David Levithan) and Paper Towns. To commemorate the publication of his 2005 debut novel, Looking for Alaska was re-released this January as a special 10th anniversary edition—which includes an introduction and question and answer section by Green and deleted scenes from the novel’s first draft. Some fans insist that Looking for Alaska is John Green’s best work, and with great reason.


In the new edition’s introduction, Green explains he wanted to show how people’s lives can be defined as before and after a particular significant event.

The book starts off with Miles Halter, who leaves Florida to attend Culver Creek, a prep school in Alabama, for his junior year. He is fond of reading biographies, specifically memorizing famous people’s last words. Miles uses Francois Rabeaisis’s last words as the reason for leaving home to attend prep school— “I go to seek a Great Perhaps.” When he arrives at Culver Creek, he meets his roommate, Chip, nicknamed “The Colonel.” The Colonel nicknames Miles “Pudge” because of his slender figure.

Lke any school, there are cliques, the most prominent two are the rich locals who go home on the weekends, and the regular kids who attend the Creek 24/7. The Colonel then introduces Miles to his friends, Takumi, and Alaska Young, a beautiful but emotionally unstable girl. Miles automatically falls in love with Alaska, even though his chances of getting with her are unlikely. John Green does a good job of character building in this time, and although the story doesn’t seem to have a direct conflict, several points of personal distaste from Miles and his peers drive the story on well enough.

Before his junior year, Miles was an outcast. He says only two people attended his going-away party, people who weren’t even his friends. This is an example of why Miles wants to seek the Great Perhaps. Alaska is an enticing young woman who is “friendly and angry, unattainable (with a boyfriend) and available, and immensely intelligent.” She leads Miles and his friends into a labyrinth of emotions that, after a devastating tragedy, make him unsure whether there’s a way out.

Looking for Alaska is a modern classic that looks into the brutal depths of young love and growing up. It is mainly based on Miles’ growing attraction to Alaska. There are parts in the story that are essential to teenage life, like pranks, studying, bets and parties. The communication between the characters, their pasts, and the way they cope with life is relative to the way teens do so in real life, which is why it has grown to be such a prestigious book among the young adult reader community. Every aspect flows with an eloquence only Green can manifest within a story. The reason Looking for Alaska stands above John Green’s other works is because he did not try so hard to write a book that touched the hearts of readers; he simply wrote it for the sake of creating a world where the reader sympathizes for and feel connected with the characters. Even if you don’t shed a tear at the end, you’ll find yourself attached to Miles and Alaska, just like they are to each other.
Posted by Michelle Libby at 11:32 PM No comments:

Mortdecai is a new action comedy movie directed by David Koepp and adapted from the same named series of comic thriller novels written by English author Kyril Bonfiglioli. Johnny Depp stars in the title role alongside a supporting cast that includes Gwyneth Paltrow (aka. Pepper Potts) and Ewan McGregor (aka. Obi-Wan Kenobi) as well as Paul Bettany, Olivia Munn and Jeff Goldblum. 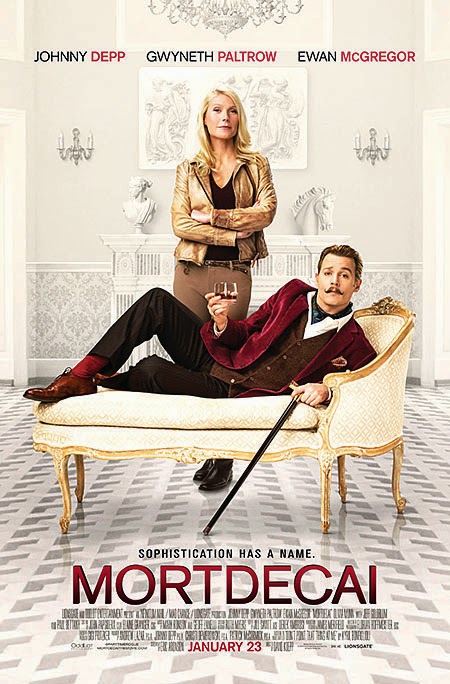 I am a huge fan of Johnny Depp, in fact he is probably one of my five favorite actors of all time. I absolutely love most of the work he did in the 1990s including Edward Scissorhands, What’s Eating Gilbert Grape and Sleepy Hollow. But my favorite character of his has got to be Captain Jack Sparrow, an absolute icon of my childhood. With that being said, I was looking forward to this movie, if for nothing more than his star power. In the end, Johnny Depp delivered as expected and Mortdecai was a decently entertaining film largely due to his performance alone.

In this movie, Johnny Depp portrays Charlie Mortdecai, an eccentric British art dealer and entrepreneur. The story centers around him and his search for a stolen painting that contains a code leading to a long lost bank account. However, he is not the only one looking for this painting as he is also pursued by a group of angry Russians, Britain’s MI5 and an international terrorist. Helped only by his wife Johanna (Paltrow) and his faithful man servant Jock Strapp (Bettany), Mortdecai must use his charm and wit in order to ensure that he is the first one to find and recover this coveted painting.

Overall, I had a pretty good time watching Mortdecai. I mean, anytime you have Johnny Depp acting like his usual self, you are practically guaranteed some quality amusement. The character of Mortdecai and everything he embodies was a perfect casting for Depp and I couldn't imagine anybody else playing in the role. Depp turned in another solid performance being clever and funny as ever; he was the clear driving force of the film. However, I can’t say that this movie was anything better than mediocre outside of his performance. Everything else about this film from the rest of the acting to the plot and storyline was just okay. Luckily, the last act of the movie was the best part and Depp did enough to make Mortdecai pretty entertaining.
Posted by Michelle Libby at 9:27 PM No comments: