In this latest installment, Eric Darnell returns as director. Brandon Sawyer who was the writer for the TV series of the same name also lends his knowledge and talent here give the penguins an adventure of their own. Rounding out the production crew is Simon J. Smith. While his filmography is short, he was the director for 2007’s loveable Bee Movie. With the help of a seasoned cast Penguins of Madagascar prove that true heroes are not born. They are hatched. 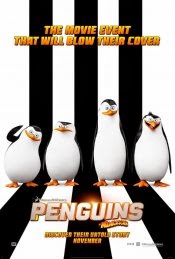 This animation adventure comedy picks up where 2012’s Madagascar 3: Europe’s Most Wanted left off.  Somewhere in the frozen Antarctic tundra three iconic birds become four; but not so easily. It all starts with a series of short and perilous attempts to save a runaway egg from a group of hungry and vicious leopard seals competing for dinner. Saved, the egg hatches revealing the young Private. Fast forward ten years and you have the beginning of a hilarious route to the unknown.

Fox DreamWorks marks its 20th year in existence by unraveling the secrets of the most entertaining and mysterious covert birds to have ever stepped into the espionage arena. Skipper, Kowalski, Rico and Private must now join forces with the North Wind. This elite undercover task force is led by Agent Classified (Benedict Cumberbatch). Their mission: To stop persistent efforts toward the transformation of the global penguin population.

Alas I give you the villainous octopus, Dr. Dave / Octavius Brine the genius behind the diabolical plan. Who other than John Malkovich could pull off such a devious, evil role with such abandonment?  From start to finish you will either loath him or take pity. Either way you cannot take him seriously. It is at these moments all that is left is for you is to laugh. You can’t help it because the humorous banter and minutia between all of the characters is non-stop and exact which proves the old adage that if the actors are having fun, so too will members of the audience, regardless of age.

I hope to hear more from these zany, enigmatical birds in future global espionage games. Meanwhile, The Penguins of Madagascar is a film that exemplifies entertainment and further proves that movie franchises can have an extended shelf life.
Posted by Michelle Libby at 12:16 PM