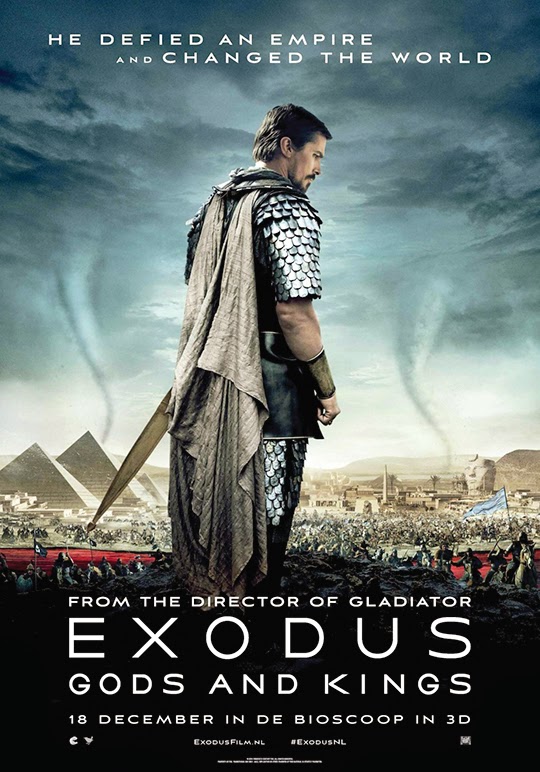 Exodus: Gods and Kings is a new biblically-inspired epic film from critically acclaimed director Ridley Scott (Gladiator, Alien, Blade Runner). The movie has a pretty solid cast led by Academy Award winner Christian Bale along with Joel Edgerton, John Turturro, Aaron Paul, Signourey Weaver and Ben Kingsley. I was really looking forward to this movie largely due to the star power of Christian Bale. He is one of my absolute favorite actors and I am a huge fan of all of his work, particularly his iconic portrayal of Patrick Bateman in American Psycho, his Oscar-winning performance as Dicky Eklund in The Fighter, and of course, perhaps his most well-known role of Bruce Wayne/Batman in Christopher Nolan’s Dark Knight Trilogy. If for nothing more than to hold me off until the release of the Middle Earth saga’s final chapter this week, I think it is fair to say that I was pretty excited to see this epic.

Exodus is simply a modern retelling of the story of Moses from the second book of the Hebrew Bible, describing the “Exodus” of the Israelites from Egypt. The defiant leader Moses (Bale), a former general and member of the royal family turned shepherd, rises up against the tyrannical rule of the Egyptian Pharaoh Ramses (Edgerton). Moses sets 600,000 Hebrew slaves free and leads them on an escape journey from Egypt and the seemingly constant string of plagues that devastates the country.

As expected, this film was incredibly epic and simply enormous in scale. I thought that director Ridley Scott did an exceptional job capturing the scope of Egypt, as well as a few big time battle scenes throughout the movie. All in all, this film was more than satisfying from a visual standpoint and that alone made the lengthy two and a half hour run time very thrilling for the most part. That being said, I think that Christian Bale really stole the show in the movie. Bale is one of the best actors working in Hollywood today and he proves it once more with his outstanding portrayal of the larger than life character of Moses. As with most biblical films, Exodus does have a few slow parts, however, in comparison, I thought this movie was better than the film Noah from earlier this year. Overall, Exodus: Gods and Kings is an entertaining, well-acted film that is truly epic.
Posted by Michelle Libby at 1:02 PM