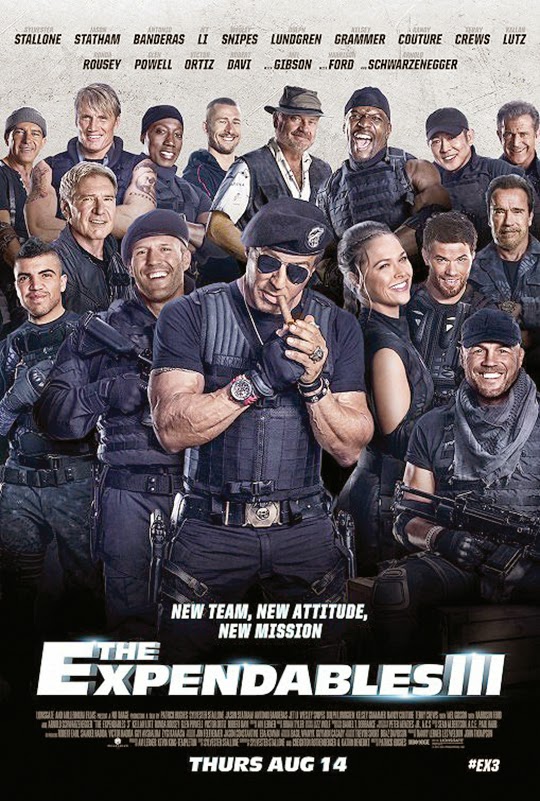 The Expendables 3 is a new action movie directed by Patrick Hughes, marking the third installment in the popular series. The movie features an ensemble of aging action stars highlighted by returning cast members: Sylvester Stallone, Jason Statham, Jet Li, Dolph Lundgren, Randy Couture, Terry Crews and Arnold Schwarenegger. There are also quite a few new additions this time around including: Antonio Banderas, Wesley Snipes, Mel Gibson and Harrison Ford. To many fans’ disappointment (myself included), this movie was dropped down to a PG-13 rating in an ultimately failed attempt to earn more money at the box office. I thought the R rating brought a much needed grittiness to the first two movies in the series, so for that reason alone, I was not that excited for this third chapter. In all honestly, The Expendables 3 is the weakest installment in the series, but at the same time it was not nearly as bad as I anticipated.

For those of you who don’t know, The Expendables films follow an elite mercenary group known as “The Expendables”, led by Barney Ross (Stallone). Early on in the film, Ross, his sidekick Lee Christmas (Statham) and the rest of the crew encounter ruthless arms dealer Conrad Stonebanks (Gibson) while attempting to intercept a bomb shipment. Years ago, Stonebanks co-founded The Expendables with Ross, but betrayed the group and became an arms dealer instead. Furthermore, Ross and the rest of The Expendables believed him to be dead prior to this meeting. Now, Stonebanks is determined to get his revenge and destroy his former team. In order to prevent this from happening and save his team, Ross must recruit some new, younger members who are more technologically advanced and physically capable of the mission.

Although I missed the presence of a few big names from the first two movies, particularly Bruce Willis and Chuck Norris, it was still great to see the old crew and new additions in action all at once. That being said, I think that the PG-13 rating really hurt this film and as I mentioned earlier, lost the gritty feeling of the first two movies. Luckily, Mel Gibson stepped up to the plate to save this movie as he was totally awesome as the villain, providing the series’ best antagonist yet. Overall, The Expendables 3 is an extremely entertaining summer action flick powered by its star-studded cast and explosive action sequences.
Posted by Michelle Libby at 5:34 PM