Movie Review: As Abover So Below (R) - Review by Stephen Signor

I must say As Above So Below is a very catchy title for a film. And that is where the novelty ends. This is a horror-able movie that takes you from the heights of 2013s Devil’s Pass to the middle ground of 2005s The Descent and thrust you into a labyrinth of catacombs deep beneath the streets of present day Paris. It is here that you will find yourself lost in a plot that is just as difficult to negotiate. While the action is fast paced and consistent it can leave you with a sense of being dazed and confused. As for the scare factor they are few and far between and provided primarily by sounds. If you’ve seen The Blair Witch Project, you know what I mean. 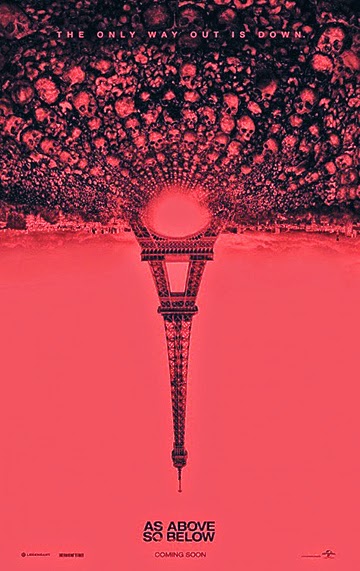 Written, produced and directed by the Dowdle brothers, John and Drew, a premise materializes warning you that the cast’s journey becomes more nightmarish with the demons of their past striking back with a vengeance. If not for the lack of visual aids this might have worked and even been believable. Even with the collaboration of Producer Jon Jashni, whose credits include being associated with The Dark Night and Pacific Rim, this film falls short in providing a plot with substance.

The roles played by the characters are far from complex right down to the way they were dressed. Who goes exploring catacombs wearing clothes normally reserved for visiting a friend’s house for lunch? I suppose that was the plan for the plot and the actors certainly pulled it off. Speaking of actors, you will not see household names however you may recognize them from other films. In particular Ben Feldman, who plays George, also appeared in the film Cloverfield as Travis.

Found footage films are a genre within a genre. But in order to survive they have to provide the viewer with non-stop entertainment. Dowdle’s previous work on Quarantine is a good example. Why he deviated from this is another mystery. One thing I do know is that as is this rating and the escape from the catacombs, the only way out is down.