Teenage Mutant Ninja Turtles is a new science-fiction/action comedy based on the beloved characters of the same name. The movie is directed by Jonathan Liebesman and is considered a reboot of the popular film franchise of the 1990s. Megan Fox stars and Michael Bay produces in this story revolving around a group of genetically mutated turtles who grew up in the sewers, were trained to be ninjas by a rat and love to eat pizza…That coupled with Bay’s  directing ego was enough to turn me off and I just wasn’t expecting much out of this film. That being said, I have to give this movie a bit of a break as you can’t really take the ridiculous premise too seriously. To my surprise, Teenage Mutant Ninja Turtles wasn’t nearly as bad as I expected it to be and it was, for the most part, a very entertaining summer action movie. 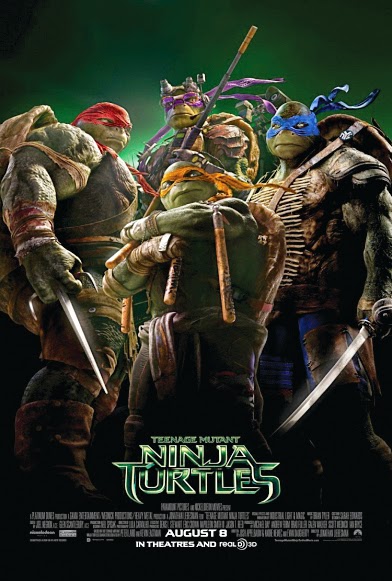 The plot for Teenage Mutant Ninja Turtles is pretty straightforward, seemingly because it is targeted at a typically younger audience. Anyways, in this movie the four turtles (Leonardo, Rafael, Donatello and Michelangelo) face their greatest threat yet and must rise from the sewers to meet their destinies and save the day. New York City is being terrorized by their archenemy Shredder, an armored ninjutsu master, as well as his evil “Foot Clan” of criminals. Together, they plan to take over the city and rule with an iron fist. Along the way, our turtle heroes soon realize they must work with an ambitious journalist named April O’ Neill (Megan Fox) in order to ruin Shredder’s plans of conquering New York.

One thing that this movie did right was portray these beloved characters. I was never a huge fan of the Teenage Mutant Ninja Turtles growing up, but I still feel it is safe to say to all you diehards out there, that this movie does do justice to all four heroes. They were all very well done and quite funny, particularly the wisecracking Michelangelo. But unfortunately, this movie does have some clear weak points highlighted by subpar acting and a clichéd, incoherent plot. However, I think the awesome action scenes and the turtles helped to make up for it. Teenage Mutant Ninja Turtles certainly isn’t the best film of the year, but I think fans will be satisfied with this new take and families entertained with a fun, summer action movie.
Posted by Michelle Libby at 10:31 PM