Transformers: Age of Extinction is a science-fiction/action movie and the latest chapter in Michael Bay’s incredibly popular Transformers series. This film is the fourth movie in the franchise following the 2011 blockbuster, Transformers: Dark of the Moon. However, this time around we have a totally new cast highlighted by “Marky Mark” Wahlberg replacing Shia LaBeouf as the main protagonist. 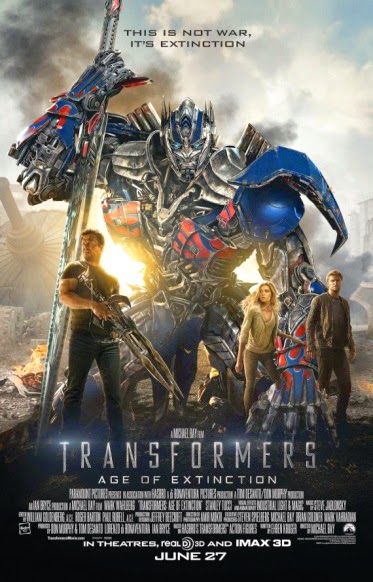 Personally, I am a huge fan of the original 2007 Transformers film. I think it still has incredible visuals and action sequences, plus relatable characters and a unique, interesting story. However for me, the two sequels, Revenge of the Fallen and Dark of the Moon got progressively worse as they just completely lost the heart and soul of the original movie. Yes, they continued to have amazing action sequences and stunning visuals but the poorly written story and script really ruined it. Heading into Age of Extinction, I was expecting this downhill trend of the Transformers franchise to continue. Unfortunately, the best I can say is that Age of Extinction is simply on par with its two disappointing predecessors.

Following the devastating Battle of Chicago, humanity has now deemed all alien robots the enemy. This even includes the Autobots, their former allies who are all in hiding now. Early on in the film, a mechanic named Cade Yeager (Mark Wahlberg) buys an old truck which he eventually discovers is the leader of the Autobots, Optimus Prime. It doesn’t take long for the government to discover his existence and they quickly send a cyborg bounty hunter from space to go track him down. Now Yeager, his daughter Tessa (Nicola Peltz) and her car-racing boyfriend Shane Dyson (Jack Reynor) must join forces with Optimus Prime and the few surviving Autobots in order to protect their existence.

As I mentioned before, Transformers: Age of Extinction is only as good as the two subpar films it follows. Once again, the action sequences and visual effects are amazing, featuring explosions that somewhat resemble the fireworks of last weekend. If that it is what you really love about movies, you will most certainly enjoy this film. However, if you are looking for good character development, decent acting and a coherent plot, this movie will not come close to meeting expectations. Transformers: Age of Extinction is an entertaining summer blockbuster for sure, but not the memorable Transformers film that we have all been waiting for since the 2007 hit.