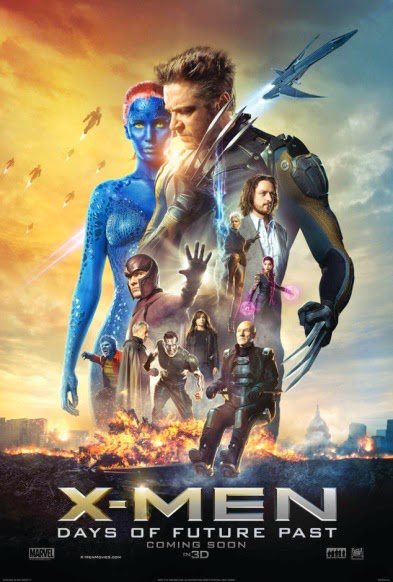 X-Men: Days of Future Past is the seventh installment in the X-Men franchise, serving as a sequel to the 2011 film X-Men: First Class as well as a follow-up to The Wolverine spin-off released last summer. Bryan Singer, director of X-Men and X2, finally returns to direct his third film in the blockbuster series. This new movie features old and new faces from the franchise in an outstanding ensemble cast. Some of the biggest names include: Hugh Jackman, James McAvoy, Michael Fassbender, Jennifer Lawrence, Nicholas Hoult, Patrick Stewart, Ian McKellen, Halle Berry and Game of Thrones star Peter Dinklage. Having heard overwhelmingly positive reviews and being a big fan of the series, I had huge expectations heading into this film.

X-Men: Days of Future Past begins ten years after the events of The Wolverine. In the dystopian future of 2023, few mutants survive while sentient robots known as the Sentinels strive to exterminate all mutants and humans alike. The surviving mutants include reunited Charles Xavier (Patrick Stewart) and Magneto (Ian McKellen), along with the rest of the original X-Men. In a desperate attempt to alter the course of history, the X-Men decide to send Wolverine (Hugh Jackman) back in time to 1973, in his body of old so he can unite with their younger selves in order to prevent this dark future from ever happening. In order to do this, they must prevent the shape-shifting Mystique (Jennifer Lawrence) from killing Bolivar Trask (Peter Dinklage), the man who created the Sentinels in the first place.

I loved absolutely everything about this time-travelling installment of the X-Men series. Usually time-travel movies can be so confusing and hard to follow, but the fast-moving plot of this film was so well-written, cohesive and easy to understand. Every single performance in this film was outstanding, particularly James McAvoy as young Xavier and Michael Fassbender as young Magneto. I thought those two had amazing chemistry in X-Men: First Class, but they took that to the next level in this sequel. Hugh Jackman was better than ever as the Wolverine in his seventh portrayal of the character and all of the returning stars were equally great. Furthermore, the thrilling action sequences were brilliantly filmed with an incredibly smart use of visual effects. Overall, X-Men: Days of Future Past is without a doubt the best X-Men movie yet and easily one of the best comic-book films ever made.

Posted by Michelle Libby at 6:02 PM