Edge of Tomorrow is a new sci-fi action movie directed by Doug Liman (The Bourne Trilogy). This film stars Tom Cruise and Emily Blunt alongside Bill Paxton and Brendan Gleeson in supporting roles. Heading into the theater, I honestly wasn’t expecting much more than two hours of fun, sci-fi action and some cool explosions from this summer blockbuster. Edge of Tomorrow completely shocked me as it provided all of that at the highest level possible, plus much, much, more. 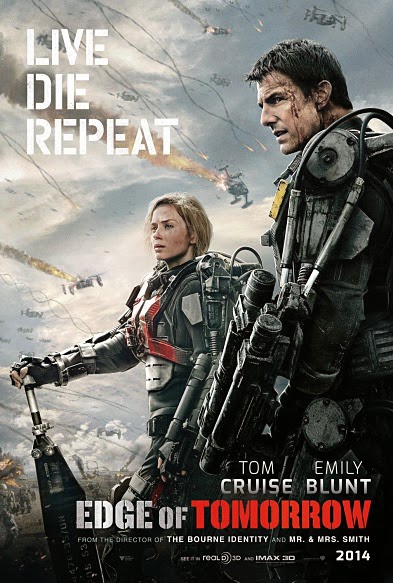 At the start of the movie, it is shown that an alien species of “Mimics” has invaded Earth and been at war with humanity’s United Defense Force (UDF) for the past five years. The UDF has just installed new tech suits called Jackets that are basically armed mechanized exoskeletons. These Jackets are to be immediately used in combat against the Mimics. Sgt. Rita Vrataski (Emily Blunt) is hailed a war hero and a cultural icon after using her Jacket to kill hundreds of Mimics.

Major William Cage (Tom Cruise) is a UDF spokesman and officer of the United States Army. Ultimately, after a series of events, he is stripped of his rank and forced onto a combat team, despite the fact that he has no field experience. After that, Cage is sent to an airport base and is deployed the following morning. Eventually he is killed by a Mimic during the war, but strangely enough he wakes up at the airport on the previous morning. Cage soon realizes that he is stuck in a time loop and every time he dies, he basically resets to that day before the invasion. Now Cage must take advantage of his situation, develop his combat skills and join forces with Sgt. Rita Vrataski in order to help the UDF defeat the Mimics and save our world.

Right from the start, I had an absolute blast with Edge of Tomorrow. Tom Cruise and Emily Blunt had outstanding chemistry as the two main characters and brought a ton of heart to the movie. There was a perfect balance of exciting action and meaningful story, plus there was a lot of great humor blended in. The visual effects were amazing, the battle scenes were incredibly shot, and the movie was just thrilling from start to finish. Edge of Tomorrow is totally original and completely phenomenal - one of the best sci-fi films I have seen in a long time.