Godzilla is a science-fiction monster film featuring the most iconic beast to ever hit the big screen. The movie is directed by Gareth Edwards and is a reboot of the Godzilla film franchise. This installment features a talented cast starring Aaron Taylor-Johnson (Kick-Ass), Ken Watanabe (Inception) and Bryan Cranston (aka Walter White), amongst others. I must say that

I was pretty excited for Godzilla. I mean, who wouldn’t want to watch a gigantic lizard lay havoc to cities across America? 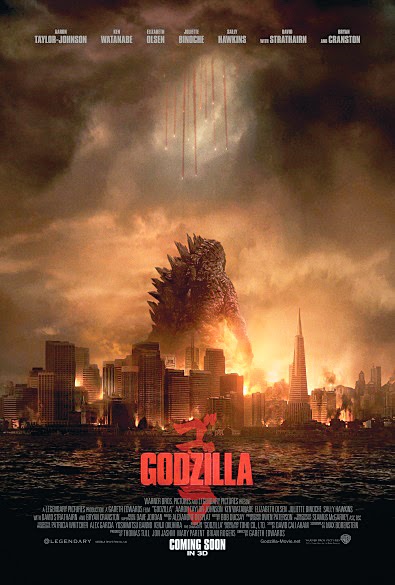 Godzilla really is a movie that is best to go into with a very open mind. I actually think you are better off knowing as little as possible about the film’s plot as it seriously adds to the experience. That being said, I will keep my summary extremely brief. Simply put, in this movie Godzilla is matched up against several colossal winged creatures who threaten the existence of humanity.

Overall, I thought that Godzilla was an awesome, exciting movie loaded with great action. The acting was pretty solid, but I just wish that we could have seen more of Bryan Cranston’s character. He did a completely fantastic job with his very limited screen time and even delivered a few incredibly emotional scenes early on. Anyways, everything else about the movie made up for it, as it was masterfully directed by Gareth Edwards. I thought he did an absolutely phenomenal job of capturing the scope of the unbelievable enormity of Godzilla. The visual effects were truly breathtaking; oftentimes jaw-dropping, and occasionally horrifying. I must give a tip of the cap to the sound department as well, since the sound effects for Godzilla were superb. This film couldn’t have done a better job of bringing the monster to life.

One issue with Godzilla was the build-up to the full revelation of Godzilla himself took way too long. There were just so many shots early on in the film where the director would tease the audience by showing a piece of the creature or simply a sound of his presence. However, once they finally showed Godzilla in his entirety, the film took a whole new direction and became a thrilling, non-stop roller coaster ride. The scenes of Godzilla throwing down with other monsters were remarkable as well. Despite a little bit of a slow build-up, Godzilla is still an excellent film that is epic, stunning, and all-in-all a truly incredible movie theater experience.

Posted by Michelle Libby at 4:07 PM No comments:

Andrew Garfield reprises his role as Peter Parker/Spiderman in this thrilling installment and I must say that he turned in an outstanding performance. In my opinion, Andrew Garfield is the definitive Spiderman and far superior to Tobey Maguire’s portrayal. Garfield brings a very natural, comedic element to the role and is just very relatable as a character. Furthermore, he shares outstanding chemistry with his love interest in the movie, Gwen Stacey, portrayed once again by Emma Stone. For me, that has been the driving point and heart of these new Spider-Man films.

In The Amazing Spider-Man 2, Peter Parker faces his greatest challenges yet, both in his personal life and his duty as Spider-Man. In this film, Peter delves deeper into the untold story of his parent’s death and its mysterious relationship to OSCORP, the industrial technology company that his father worked for. Peter also reconnects with his childhood friend, Harry Osborn, portrayed magnificently by Dane DeHaan. Furthermore, he must protect New York City from a whole new group of threatening super villains. Amongst these villains is Spider-Man’s primary threat, Electro (Jamie Foxx), a human electric generator capable of destroying the city.

Overall, I had a great time with this movie as it was action-packed, visually stunning and well-acted. Andrew Garfield, Emma Stone, and Dane DeHaan are an outstanding trio of rising stars and they were all incredible in their roles. My one complaint is that there was so much going on in the story, that it was sometimes choppy, rushed and a little hard to follow. However, The Amazing Spider-Man 2 was still an extremely entertaining movie that gets me really excited for future installments.
Posted by Michelle Libby at 4:31 PM No comments:

Movie Review - The Other Woman (PG-13) - Review by Niels Mank


Let me start off by saying, any movie with Cameron Diaz and Leslie Mann is a sure winner in my book, but add Kate Upton to that cast and you will have every man volunteering to take his wife to this chick flick.

Diaz, Mann and Upton play amazing roles in this hilarious comedy. Kate (played by Mann) is married to Mark (played by Nikolaj Coster-Waldau) and they live in Connecticut. Kate is your typical stay at home wife living in the big mansion. She wears around a housecoat and is anything but sexy. Carly (played by Diaz) is a sophisticated businesswoman living in Manhattan.

The movie begins with Mark and Carly having a sexual relationship. You can probably see where this is going. When Carly sets up a dinner meeting with her dad and invites Mark he flakes out on her with a story of burst pipes at his Connecticut house. Carly decides to surprise him at his house and shows up in a sexy plumbing outfit. When she knocks on the door who answers? None other than Kate, Mark’s wife.

Diaz immediately makes an excuse that she is at the wrong house and proceeds to stop taking Mark’s calls and vows not to be “the other woman” but when Kate tracks her down and confronts her, a very strange relationship emerges. Kate decides that she wants to know everything and in order to do that becomes friends with Carly. The two decide to work together against Mark and expose his indiscretions and there are many.

Amber is Mark’s newest fling and after Carly and Kate approach her she decides to dump Mark and join them on their quest to destroy him. This movie is a true chick flick with a cast designed to draw men in and a story line that keeps you laughing all the way to the end. The movie has a “First Wives Club” feel. This movie is a must see for any couple.
Posted by Michelle Libby at 10:31 PM No comments:


Financial derivatives, convertibles and futures contracts make my eyes roll back and my head ache. With misgivings, I chose Black Fridays by Michael Sears as Goodreads.com called it a financial thriller. I’m glad I ignored the obvious oxymoron and ordered the book. 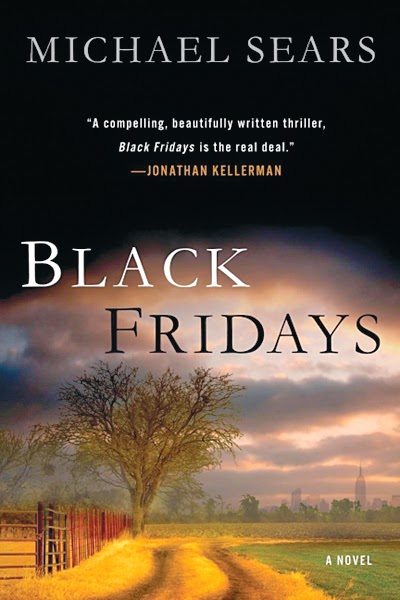 The 341 page novel published in 2012 by the Penguin Group opens with a graphic description of a woman’s fall from thirty-eight floors on Wall Street. The NYPD closes the case as a suicide even though a witness suggests a suicide doesn’t scream falling to her death.

After this grisly prologue Jason Stafford leaves Otisville, the federal prison where he’s done his time as a white-collar criminal. He wants to regroup with his wife and autistic son and make a new life. Angie has other alcohol-soaked ideas that don’t include Jason. He discovers her treatment of their son has been deplorable during his incarceration and removes the boy from the abuse. Addled Angie wishes him good luck and seems out of the picture, temporarily as it turns out.

Because of Jason’s criminal insights Weld Securities hires him to investigate some trading inconsistencies of their own. The suspicious death of an up-and-coming trader and the suicide of another are at the foundation of the unfolding mystery.

Jason begins to discover an elaborate financial scheme as he tries to pull his life together; “The Kid” becomes the center of his world. Another player in his new life is Wanda, who works as a clown’s assistant; really, I’m not kidding. He calls her “Skeli.” She’s beautiful, smart and an ex-Broadway performer and it just might work.

With the crucial aid of youthful Spud, a utility infielder type of Wall Street trader, Jason starts drilling into some fishy trading patterns. They’re led to a firm called Arrowhead, a British hedge-fund and a trader named Hochstadt. Bill Stockman the Weld CFO seems innocent; Sanders is a dead trader; Avery is a legal-type in Compliance; Stafford scrutinizes all. Angie meanwhile puddles like a wicked witch back into the trailer trash she had risen from when she married Jason.

Sears writes well and tells a good double-barreled story: Will Jason get to the bottom of the Wall Street mystery and who will get custody of the boy? People lie, people die and the whole while Sears kept my financial phobia headaches at bay. I found Black Fridays to be an excellent investment of time. It’s available at the Portland Public Library.

Posted by Michelle Libby at 1:03 PM No comments:


Remember when we were kids and we sat in front of the TV to watch The Muppet Show? There was unlimited family-friendly fun, with catchy songs and snappy one-liners. This Muppet sequel, The Muppets Most Wanted, has all of those memories and a fun plot that is great for kids with lots of laughs for their adult drivers. 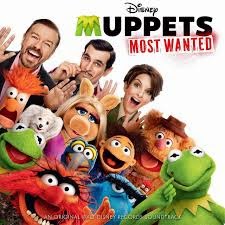 Constantine, the world most dangerous frog, (voiced by Eric Jacobson) has escaped prison in Siberia and with the help from his number two, Dominic Badguy (Ricky Gervais), sets up our hero Kermit. Kermit is sent to the Siberian prison because he is thought to be Constanine “It’s not easy being mean” Frog, where his warden is Nadya, played by Tina Fay. She doesn’t care that Kermit isn’t really Constantine, she’s infatuated with Kurmeet. She asks him to produce the annual prison review show.

Meanwhile, no one realized that Kermit was missing. Sure he was acting weird and being very romantic to Miss Piggy who was planning their wedding, even though Kermit hadn’t even proposed to her, but no one truly realizes he’s missing.

There is a lot of slapstick comedy and fun, if not predictable, plot twists. There are many cameo appearances by famous actors and music talents. “Where is the Usher?” and he turns around. The singer Usher. I laughed, not sure if anyone else in the theater did.

The acting was great and I would actually see this movie again when it comes out on DVD.

Muppets Most Wanted was a great way to pass an afternoon with the kids. I do recommend this movie to those who want to spend time with the kids on rainy day or sometime when everyone needs to get out of the house.
Posted by Michelle Libby at 12:59 PM No comments: