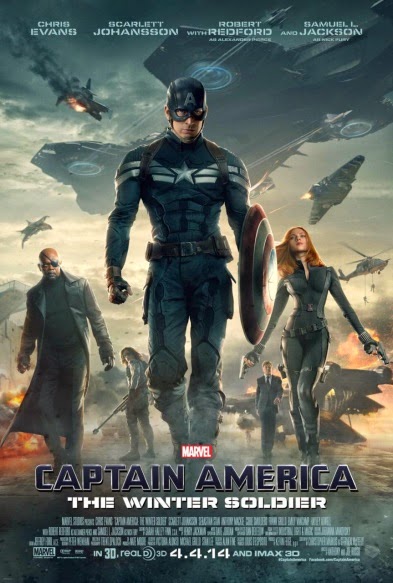 Captain America: The Winter Soldier is a superhero film featuring Marvel Comics’ iconic character Captain America. It is the ninth installment in the Marvel Cinematic Universe but it also serves as a sequel to the 2011 film, Captain America: The First Avenger.  Chris Evans returns once more for the title role, along with some other familiar faces including Scarlett Johansson as the Black Widow and Samuel L. Jackson as Nick Fury. Captain America: The Winter Soldier follows Iron Man 3 and Thor: The Dark World as the third film in “Phase 2” of the Avengers series. Having heard overwhelmingly positive reviews and being a massive Marvel fan, I had huge expectations heading into this film. Somehow, this movie managed to surpass those expectations on every level.

This is the first stand-alone film for Steve Rogers/Captain America after being frozen in ice since World War 2, so the movie deals a lot with his continuing struggle to embrace his role in the modern world. Two years after the Battle of New York from The Avengers, Captain America continues to work for the espionage agency, S.H.I.E.L.D. Without giving too much away, this time around, Captain America must team up with the Black Widow in order to help S.H.I.E.L.D. fight against a threat from within its own organization. At the same time, he is hunted down by a highly trained assassin that can match him physically, who is known as the Winter Soldier. This film also introduces another new face and ally to Captain America, the Falcon, portrayed by Anthony Mackie (The Hurt Locker). The Falcon is pararescueman trained by the military in aerial combat using a specially designed wing pack. I thought that he was a fantastic addition to the movie and a perfect sidekick for Captain America.

I loved basically everything about Captain America: The Winter Soldier. The film did everything that a sequel should do, introducing awesome new characters, a more advanced plot and an outstanding villain. The acting was excellent across the board; all the familiar faces were better than ever and the new additions were just as great. The action scenes were absolutely phenomenal and the visuals were incredible. Captain America: The Winter Soldier is hands down the best film of 2014 and it stands amongst the all-time great comic book movies. Other than 2012’s The Avengers, this is easily the best film in the Marvel Cinematic Universe.

Posted by Michelle Libby at 2:46 PM