Before I begin my review of “Divergent”, I must first confess that I did not read the book.  My 14-year-old daughter and her band of friends that think that this is going to be the next “Hunger Games” have told me great things about the book.  To be honest, I have zero desire to read this series of books. 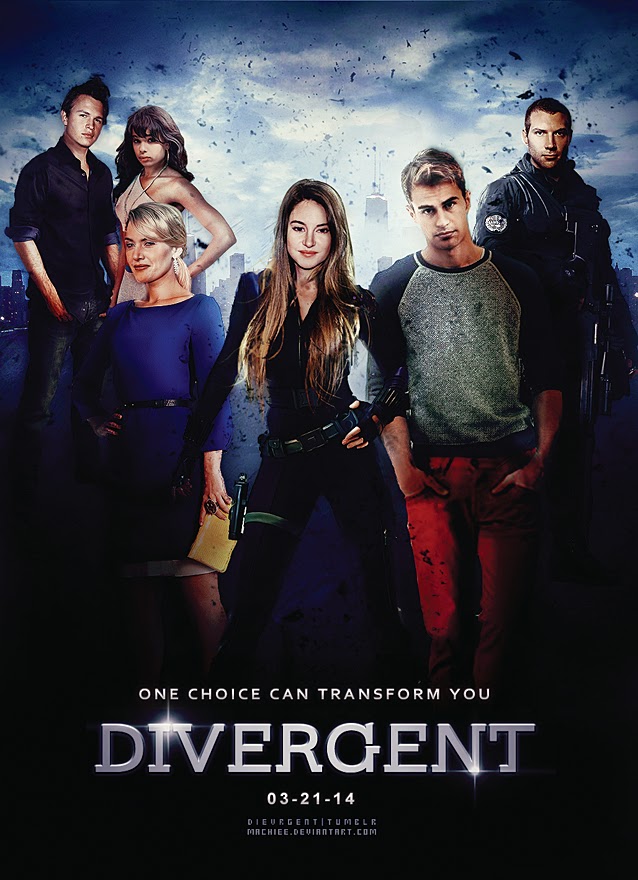 With that said, this movie is based on the book “Divergent” by up-and-coming young author Veronica Roth.  The movie is set in a future Chicago, and the viewer is led to believe that some sort of massive war has left the world in ruins, but Chicago has figured it out.  They have five factions of society:   Abnegation, who are selfless, Amity, who are peaceful, Candor, the truthful people, Erudite, the smart and/or intelligent people, and Dauntless, the brave protectors of the city.  When the citizens of the city reach 16 years of age, they are given a test to determine which faction they are best suited for.  The test, however, is only to help them decide, as they are allowed to make the final decision on their own.  Should they not fit in and leave their chosen faction, they are then left “faction-less” and are essentially homeless.

The film revolves around Beatrice Prior (Shailene Woodley), who was raised in the Abnegation faction.  When tested, she doesn’t fit in with any faction and is deemed divergent by her tester Tori (Maggie Q), who tells Beatrice that she should remain with her current faction and never to tell anyone about her test results.  Beatrice goes against Tori’s advice and joins Dauntless.  Once in Dauntless, Beatrice assumes the name Tris as her Dauntless name and begins training under Four (yes, that’s his name.... played by Theo James) and Eric (Jai Courtney).

The newly minted Dauntless Tris struggles in her training, but works extremely hard to earn the respect of her fellow trainees and trainers.  Four works with her to improve her abilities, but also notices that what she lacks in physical abilities, she more than makes up for in her logic and work ethic.  In one of her trials, Four realizes that she is divergent... like him.  Together, they learn that Jeanine (Kate Winslet), the leader of the Erudites, is attempting to overthrow the leader of the government, which is currently held by Tris’ father, Andrew (Tony Goldwyn).

The movie was worth watching.  I’ll probably even watch it a second time when it is released on DVD.  Was it “The Hunger Games”?  Nope.  Not even close.  I had no desire to see “The Hunger Games” when it was first released.  I hadn’t read the book and thought it would be dumb.  When my wife and kid eventually dragged me into the theater, I was so pleasantly surprised that I looked forward to the next installment.  I had high hopes for “Divergent” based on the comparison between to “The Hunger Games”, and sadly, I don’t think the movie lived up to the hype.

“Divergent” was rated PG-13 for language and violence.   I think that this was an appropriate rating, but I also can’t see a reason why I wouldn’t let a 10-year-old watch it.  We brought along our 11-year-old friend to Smitty’s Cinema to enjoy this film with us and she was not traumatized by the movie.
Posted by Michelle Libby at 10:21 PM