Robocop is a sci-fi/action movie and a remake of the 1987 film of the same title. I never got a chance to see the original movie, so this was something totally new to me. That being said, I didn’t really expect much from this movie as most Hollywood remakes just don’t turn out to be very good. However, I now consider Robocop one of the rare exceptions as it actually surprised me with some fun action and solid acting from its strong cast. Even though the title role isn’t that complex of a character, I thought that Joel Kinnaman did a pretty good job playing the part. Samuel L. Jackson also got some screen time, adding some nice comic relief in his amusing performance. 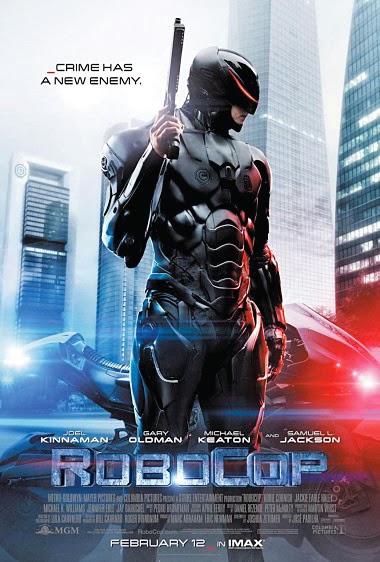 In the year 2028, Omnicorp is the world’s leader in robot technology and they create robots to be used overseas by the US Military. Omnicorp CEO Raymond Sellars (Michael Keaton) wants to use these robots domestically, particularly in the area of law enforcement. The only thing holding back the government from approving this plan is the fact that they want humane officers who have real emotion and truly care for human beings. In order to make this happen, Sellars hopes to create something that is part man and part machine. All he needs is someone to fill this spot.

Detroit cop Alex Murphy (Joel Kinnaman) is critically injured on duty. The only way to save his life is to turn him into a cyborg crime fighter. With help from Dr. Dennett Norton (Gary Oldman), Raymond Sellars makes this happen, creating the first Omnicorp “Robocop”. Throughout the movie, Norton and Sellars make a few upgrades to Alex but as they do this, he becomes more of a robot than a man, eventually becoming an emotionless machine. Thanks to Alex, the crime rate in Detroit is drastically reduced, but more importantly he has to find a way to regain his humanity.

I thought that Robocop was a pretty good movie with fun action, impressive special effects and solid acting. However, the movie does have its flaws. It felt much longer than it needed to be as the middle portion of the film was slow at times. But at the same time, certain parts of the story felt quite rushed. Luckily, the exciting action sequences and cool training sequences made up for this, making Robocop a pretty enjoyable film.

Posted by Michelle Libby at 3:31 PM