Rated: PG
Running time: 100
The Lego Movie with my father. The movie is about a Lego minifigure named Emmett (voiced by Chris Pratt, Zero Dark Thirty) who is just like everyone else, but through a strange set of circumstances found himself to be on a mission to save the universe from the evil Lord Business (voiced by Will Ferrell). Lord Business plans to release the Kragle and destroy the world. Emmett’s adventure takes him to the wild west, a sprawling city, the Medieval ages, and a massive office building. 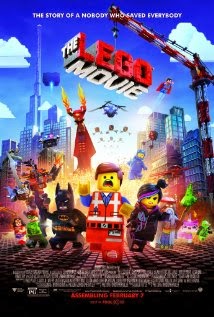 The characters are really enjoyable and they are from all of the different Lego licenses like Star Wars and Batman. I personally loved the movie even though I thought that it was aimed at younger kids. I believe that my father liked it as well and it had a great overarching moral, that no one should squander a great creative mind.

The way that the directors (Chris Miller and Phil Lord) incorporated the amazing animation with the traditional Lego stop motion was incredible and made the movie so much cooler.

I have heard it called the new Toy Story and I wholeheartedly disagree. With Toy Story all of the love and enjoyment came after and because of the movie, but with Legos the fans are already there and in large numbers. This will just keep the fire burning and continue the love of Legos into the next generation. It was to quote the movie "awesome".
Posted by Michelle Libby at 1:30 PM