Movie Review of The Monuments Men - Review by Daniel Kilgallon

Written and directed by George Clooney, “The Monuments Men” is an action/drama film taking place during the closing stages of World War II. Clooney also stars in the movie alongside an ensemble cast featuring Matt Damon, Bill Murray and John Goodman amongst others. With such a great group of actors and an intriguing premise, I was really looking forward to this film. “The Monuments Men” wasn’t quite as monumental as I hoped, but it is still makes for a pretty good time at the movies. 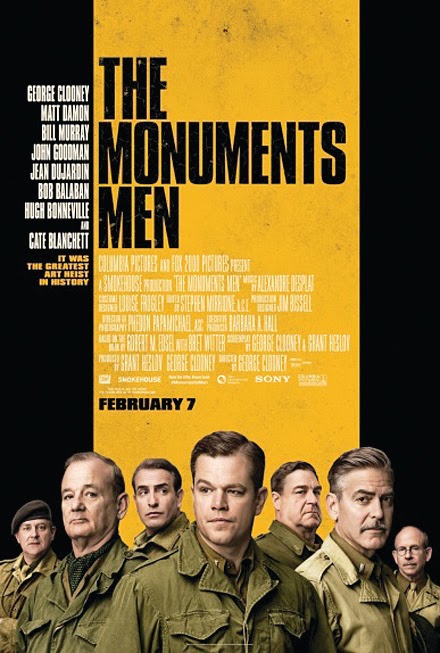 The film focuses on the true story of an unlikely World War II Allied squad. This unique band consists of seven men, including museum directors, curators and art historians. The group calls themselves “The Monuments Men” as Franklin D. Roosevelt appoints them with the task of rescuing artistic masterpieces from Nazi thieves. They must save as many pieces of this art as they can and return them to their rightful owners before Adolf Hitler destroys all of it.

In order to save the art and preserve important pieces of history, this brave group of men must travel to Germany with the Allied forces. Their mission seems nearly impossible as all of the artwork is trapped behind enemy lines. Furthermore, none of the men in the group have much military experience. Nevertheless, they are all willing to risk their lives to protect and defend many famous pieces of art. I loved the message that this film delivered as it did a great job of showing just how much those men cared about some of mankind’s greatest achievements.

Unfortunately, one thing that this movie struggled with was establishing a mood throughout the film. At times the film was very serious and heartfelt, but on the other hand, there were was an awful lot of humor mixed in. This was expected with actors like Bill Murray and John Goodman playing major roles, but I still wish that the movie picked one mood and rolled with it. However, to no surprise this movie showcased some fantastic performances from its impressive cast.

Despite a rather slow build up and quite a few dull moments, “The Monuments Men” still tells a good story and as I mentioned earlier, delivers a great message. It wasn’t exactly the most exciting way to depict the greatest treasure hunt in history, but the humor coupled with top notch acting helped to keep the story moving.

Posted by Michelle Libby at 3:22 PM