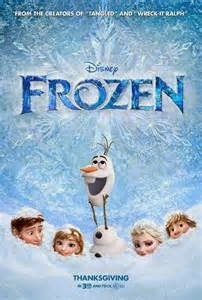 What’s not to like when you have a prince, princesses, castles, magic, snow monsters, and adorable snowmen all packed into one movie. Disney’s FROZEN is a family movie that is sure to please.


The plot of the story is centered on two sisters Anna (voice of Kristen Bell) and Elsa (voice of Idena Menzel) who happen to be princesses. They are the best of friends until an accident one day breaks them apart. They spend the rest of their childhood years apart from each other until coronation day when they are reunited for a grand ball. As the day comes to a close their past comes back to haunt them and they are torn apart again. Elsa runs away for the safety of the entire kingdom and the eternal optimist Anna follows her desperate to reunite her family. Anna follows her sister and meets a snowman named Olaf (voice of Josh Gad) who was created by her sister when they were just children. Olaf accompanies Anna for the rest of her journey and fills the theater with laughter and smiles. Anna also runs into a wander named Kristoff (voice of Jonathan Groff) and his faithful reindeer Sven. Kristoff and Sven guide Anna to her sister. As you can imagine, along the way, Kristoff and Anna develop a love for each other.


The movie is filled with hidden secrets from the creators at Disney. You will find yourself going back to the theater to watch for the hidden images time and time again. Here are some hints… Mickey Mouse makes an appearance when Anna is at the “Wandering Oaken’s Trading Post”, Rapunzel makes a guest appearance at Elsa’s coronation ball along with her beau Flynn, and Anna mimics the pose on the tree swing of Rapunzel in the movie “Tangled”. 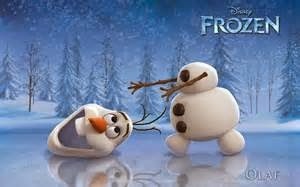 I, like many, have been watching the trailers for FROZEN on TV and entered the theater expecting a funny winter wonderland story about a princess and her talking snowman. I was surprised and excited to find a love story, much like the love story in “Aladdin” between a princess and a humble drifter. This movie has something to relate to all members of your family whether they are four years old or 40 years old. Disney’s FROZEN is a must watch.
Posted by Michelle Libby at 8:00 PM