If you are thinking this sounds like a great family movie about a great family, then stop right there. This is in no way a family movie. This is an R-plus rating with a lot of language, drugs and even a very disturbing crotch scene. That being said if you are all adults and looking for a great laugh, then look no further. We’re the Miller’s packs a lot of off-the-cuff humor with a great story that is easily followed. If you end up laughing so hard that you miss a scene, fear not, you will not be lost. 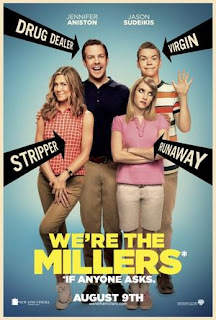 David (Jason Sudeikis) is a middle aged burn out that deals drugs. When his stash along with his money is stolen he makes a deal with his supplier to pick up a “smidge” of product in Mexico to clear his debt. He comes up with an idea to smuggle the product back in an RV while posing as a proud dad and his family. The only problem… he is not married and has no family. He enlists the help of his stripper neighbor, Rose (Jennifer Aniston), a homeless girl, Casey (Emma Roberts), and a young neighbor left home alone, Kenny (Will Poulter), to make up a fake family and pull off this ridiculous plan. After this “team” comes together it is nothing but one funny moment after another.

At first it was Jennifer Aniston, who plays (Rose) a stripper that drew me to go see this movie. As always Aniston’s performance was amazing. Jason Sudeikis who plays the leading character David was a logical choice for the role but could very well have been replaced by many other leading stars. His performance, while good, was not great. Will Poulter on the other hand plays the role of Kenny, a dork with no social skills, and delivers an amazing performance with mostly just his facial expressions. The biggest surprise was the character of Casey (Emma Roberts) who really played an amazing role and really showed her depth as an actress transforming from a homeless drifter to a proper little lady. She has come a long way since her last big role “Hotel for Dogs”.

While I expected the movie to be funny I did not expect that I would be laughing as hard as I was. In fact the entire theater was laughing at the ongoing humor in this movie. This is a must watch for any adults looking for a great laugh-out-loud humor movie. I would rate it up there with Hangover #1 and #2. Don’t forget to stay for the outtakes at the end of the movie.

Posted by Michelle Libby at 9:10 AM