He’s a cranky, retired author who had a big hit 40 years ago. She’s inherited her father’s publishing company and is looking for anything to help the company stay in business. When Stanbridge Publishing convinces Salinger-esque Harris Shaw to go on one final book tour, Lucy Stanbridge did not know what she was embarking on. To be fair, neither did Shaw. 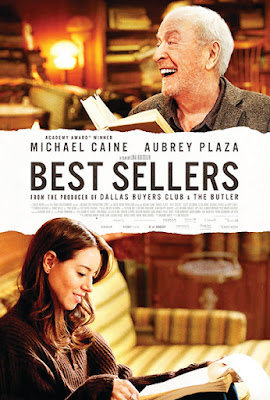 That’s the plot of “Best Sellers,” which might make you laugh while also tugging at your heartstrings a little. It stars Michael Caine, Aubrey Plaza, Ellen Wong, Scott Speedman and Cary Elwes.

Harris Shaw (Caine) has a well-known reputation for being a recluse. However, this does not stop Lucy (Plaza) from pursuing him to get another book from him to give her publishing company a much-needed boost. According to a contract, Shaw owes Lucy one more book. She breaks into his home to plead her case. It is not well received.

Breaking and entering aside, Shaw is not a nice guy. But for some reason, he drives to Stanbridge Publishing and gives Lucy her “pound of flesh.”

Stanbridge informs him, he now has to go on a book tour. In his first stop on the tour, he flubs it by instead reading from “Penthouse.” He later ends up in jail.

On the next stop, he says everything is drivel, though he uses a different word. Although he is self-sabotaging, people love him. His popularity increases online. Shaw continues to refuse to read from his own book.

And then Shaw’s popularity grinds to a screeching halt. People still want to see him, but only for his antics, not to buy his book.

With Shaw’s book not selling, Stanbridge is being pressured to sell the company by Jack (Speedman) but continues to hold out. She finds a very clever workaround to get Shaw’s words to be heard.

Shaw is not getting any nicer and Stanbridge is struggling. In what could be described as a moment of weakness on Shaw’s part, he tells Stanbridge about his personal life and his wife.

In regard to him finding someone to marry him, he tells her,

“Even the worst of us get lucky.”

From here on out, Shaw softens a little.

You learn a little more about Lucy’s personal life and some revelations are made. Shaw continues to self-sabotage, but the effect is not what he had in mind.

As the movie draws to a close it’s both sweet and sad.

Caine and Plaza are wonderful together. They both need the other for various reasons, but don’t know it. At times being somewhat of a comedic team, with Caine as the straight man.

As a fan of the television series “Parks and Recreation,” it was nice to see Plaza in a non-April Ludgate role. Caine’s transformation from a rather unpleasant fellow to who he is to Lucy at the end of the movie is a heartwarming one.

Although the language and character behaviors, one in particular, can get a bit rocky from time-to-time, this is a good movie. It’s probably not for the whole family, but one worth the time.

Available to rent or on the Starz network. <
Posted by Ed Pierce at 2:02 AM No comments:

This title is so this long and complex and references other movies; when I first heard it, I thought this is a farce – but it’s actually a decent thriller. It may be both. 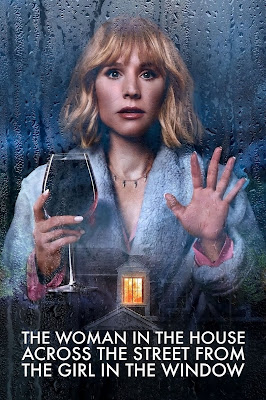 If you take this series at face value, it can be nothing more than a solid thriller. In an interview with Jimmy Kimmel, star Kristen Bell described the series as a satirical thriller, poking fun at movies like “The Girl on the Train,” “The Woman in the Window,” and others.

And it does do that. However, unless you are very familiar with these types of movies, you might not pick up on all the jabs they take. I know I didn’t.

This eight-episode series, “The Woman in the House Across the Street from the Girl in the Window” stars Kristen Bell, Michael Ealy, Mary Holland, Tom Riley, Cameron Britton, Appy Pratt and Shelly Hennig.

Anna (Bell) is divorced and spends her days in a funk, upset over the past. When she runs into neighbor Neil (Riley) and daughter Elizabeth (Pratt) she notices he is in a similar situation. They begin to become friends. This may or may not be short lived.

Anna has ombrophobia, a fear of rain.  This plays somewhat into the series. She wishes for a future where monsters don’t exist.

When Anna finds out Neil has a girlfriend, Lisa (Hennig), her feelings toward him change. Despite her aversion to Lisa, Anna notices something strange from her window – or is it because of all the wine and pills she’s taken? It’s raining, so Anna has trouble getting over to Neil’s house. She calls 911.

Things don’t go so well for Anna from this point on. She decides if the authorities won’t handle this possible mystery, she will. Anna begins to build a case through Instagram and tracks down certain individuals.

There are many Lifetime-ish, After-School-Special lines throughout this series.

At one point Anna asks herself,

“When am I not hallucinating?”

“Life is for the living.”

“I barely believed in myself.”

“Would someone please tell me what’s going on?”

“I didn’t kill anybody!”

I hope this series gets a season two. It was a very good mystery, and you cannot go wrong with Kristen Bell. By the end of episode two, I was hooked and watched the entire thing in one day. (Maybe I shouldn’t admit that, but the series is that good).

It does contain a little violence, language and mild nudity, but it’s both fun and suspenseful. Can you figure out who did it?

I give this two casseroles up; why are there so many casseroles? I saw more casseroles in this series than I’ve seen in real life in the past couple years.

Email ThisBlogThis!Share to TwitterShare to FacebookShare to Pinterest
Labels: Kristen Bell, Matt Pascarella, mystery, Netflix, review, The Windham Eagle, The Woman in the House Across the Street from the Girl in the Window, thriller
Newer Posts Older Posts Home
Subscribe to: Posts (Atom)