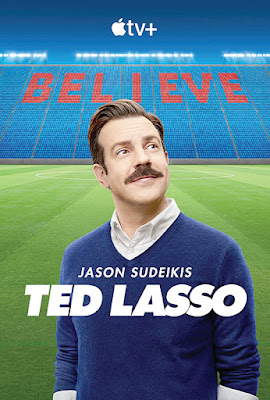 From the outstanding cast of supporting characters to it’s funny and folksy dialogue from this Kansas coach who finds himself navigating a strange, new world; this is a great show.

Available only on Apple TV+, but I promise signing up for a month just to watch this is money well spent. It stars Jason Sudeikis, Hannah Waddingham, Phil Dunster, Brett Goldstein, Juno Temple, Brendan Hunt and Nick Mohammed.

After she discovers her husband has been cheating on her, co-owner of England’s AFC Richmond football team, Rebecca Welton (Waddingham) gets the team in her divorce. Her plan is to hire a terrible coach and tank the team as revenge against her ex-husband.

She hires Lasso (Sudeikis) who admits to not understanding anything about soccer.

He and his assistant coach, Coach Beard (Hunt) and equipment manager Nate Sullivan (Mohammed) aren’t met with the warmest welcome from fans. Despite his best efforts, he is viewed as a joke and members of the team are just counting the days until he goes back to America.

Coach Lasso makes it known early on he is up to this challenge. While he is instantly disliked by many from the start, Lasso has a way of winning them over, whether it be his persistence of getting to know cold owner Rebecca with his morning ‘biscuits with the boss’ or the way he deals with the players notably Jamie Tartt (Dunster) and Roy Kent (Goldstein).

Lasso quips many pearls of wisdom throughout the series that stuck in my head.

After a fight breaks out in the locker room, he tells the players,“I like my locker room like I like my mama’s bathing suits – in one piece.”

Part of Lasso’s likeability comes from the fact that he is very positive despite the odds kind of being against him. He really tries to make the best of things. This show highlights the power of positivity.

In a particularly excellent scene where he earns some points with Rebecca, he explains that he’s been underestimated his whole life and encourages those around him to ‘be curious, not judgmental.’

The relationships between the characters, like player Jamie Tartt and model Keeley Jones (Temple) show exceptional character development. Over the course of the series, Lasso affects all the characters in one way or another.

The future of AFC Richmond and those associated with it continues to develop in new, heartfelt ways. Will Lasso remain up to the challenge?

Currently in its second season, episodes are so layered with jokes, you have to wait to laugh sometimes, so you don’t miss the next joke. In juxtaposition with its charm, there is a quite a bit of swearing throughout the series.

The end of every episode always leaves me wanting more. I’d recommend this show; give it at least three episodes. I think “Ted Lasso” will hook you before then.