Movie Review: What to watch now that it’s officially the holidays

The holiday season is right around the corner, 2020 is finally on its way out, and holiday movies are here. While you and your family are recovering from a Thanksgiving feast, here are a few of my personal favorites to bring in the yuletide cheer.

Without a doubt, this is my favorite of the holiday movies. A kid-friendly adaptation of Charles Dickens’ famed classic ‘A Christmas Carol’ featuring the Muppets with Michael Caine as grumpy miser, Ebenezer Scrooge. I feel like this is one kids and adults can enjoy. Five out of five red scarves. Available on Disney+. 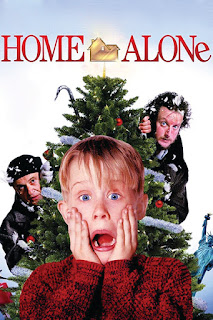 This cartoon short is, in my humble opinion, the best version of the tale written by Dr. Seuss. All the Whos down in Whoville, liked Christmas a lot, but the Grinch who lived just north of Whoville, did not. Can he stop Christmas from coming? Will he have a change of heart? Five out of five cans of Who Hash. Available to rent.

When little Kevin McCallister is accidently left home alone, he has to protect himself from two less than intelligent criminals. He discovers how to fend for himself and learns the importance of family. This is a classic. Five out of five broken ornaments. Available on Disney+.

A certain fellow in a red suit with a big white beard takes a spill off Scott Calvin’s roof. Not to fear! SC fills in and helps out the big guy, only to realize he may have stepped into a more permanent role. Five out of five cups of cocoa. Available on Disney+.

I’ll admit, this is not a must-watch on my list, but it is a decent holiday movie with a great cast – Will Ferrell, Zooey Deschanel, Ed Asner, Bob Newhart, James Caan, Peter Dinklage – just to name a few. Buddy the Elf, or so he thinks, travels to New York City in search of family. What follows is funny and heartwarming. Three out of five curly slippers. Available on STARZ and to rent.

When George Bailey, the man who always put others before himself, hits a bit of bad luck, he contemplates doing something that would change everything. That’s when George gets a glimpse of what life would be like if he were never born. Available on Amazon Prime.

What would a holiday movie list be without an appearance from John McClane? When German terrorists take his wife hostage during a Christmas party at Nakatomi Plaza, it’s up to McClane to save the day. Four out of five Yippee Ki-Yays. Available on HBO MAX.

Clark Griswold only wants to give his family the best Christmas he possibly can. If only relatives, a boss who shorts him a Christmas bonus, nosy neighbors, and a well-meaning, but aloof brother didn’t get in the way! Keep an eye out for Seinfeld’s Elaine in this one. Four out of five tangled strands of Christmas lights. Available to rent. <

Prince (Michael Worth) is down on his luck. The bank won’t give him a loan, his father died, and his girlfriend left him. On some misguided advice from a bartender, Prince decides to go on a road trip back to his town of Apple Seed to rob a bank – the bank he feels has wronged him after so many years of loyal service. After meeting an eccentric older man with a zest for life named Carl (Rance Howard), the two embark on a journey.

When Prince first meets Carl they are complete opposites. Prince is very reserved and not talkative, where Carl at one point draws a crowd just speaking in his lively manner. I found this movie to be moderately enjoyable, but a little on the long side. 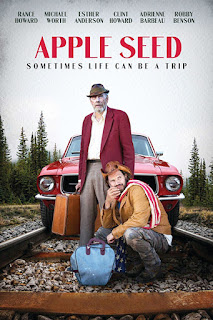 At a motel, Carl’s wallet is stolen by Rocky (Sarah De La Isla). After the problem is remedied, she joins their road trip. They also meet singer Dallas (Dasha Chadwick) who joins their bunch.

Prince gets into a fight and is saved by Carl. It’s here Prince learns Carl is an ex-convict.

After dropping Dallas off at her desired destination, Carl seeks to right a wrong and pays a visit to Sirom (Robby Benson), who was part of Carl’s team when he robbed that bank so many years ago. Sirom is happy to see him and they spend some time with him. At this point Rocky leaves the group.

Shortly after their car breaks down, the two hop a train and ride the rails. Carl seeks to right another wrong and visits his son, Hughie (Clint Howard). Hughie isn’t pleased to see him. He’s angry that Carl wasn’t there when Hughie’s mother died.

There are lots of motivational/inspirational quotes in this movie. When Carl and Prince reach the end of their road trip and part ways, Carl tells him, “Whatever you hope to find ... or whatever you hope to make right, the past is only good for reminding you, you still have a future.”

Prince still plans to go through with the robbery, even after all he has seen with Carl and all the things Carl has told him.

Will Prince rob the Apple Seed Bank? What will happen to him? Will he ever meet up with Carl again? Is there more to this I’m leaving out?

The movie starts all about Prince and how he’ll make up for his shortcomings but turns into more of Carl leading by example of how to get the most out of life. This movie has several valuable lessons about living life to the fullest, seizing the moments and knowing that going through life with others is better than going alone.

It has a fairly strong first act and a decent second act, but the third act, while somewhat exciting with twists and turns, needed more explanation for why some character decisions were made. It does have a nice soundtrack. I enjoyed 90 of its 120 minutes. I give it only one cowboy hat up.

Movie Review: “Knives Out” a slow burn with a decent ending

There’s been a murder! Well, maybe there’s been a murder. When patriarch, Harlan Thrombey (Christopher Plummer) is found dead, his family and those who worked for him are questioned by detectives. As the motives begin to present themselves, private investigator Benoit Blanc (Daniel Craig) rules everyone is a suspect and requires this combative family to remain at Harlan’s home until this mystery is solved. Is everything as it has been presented to Blanc?

This witty comedy/mystery, while on the longer side, is a solid murder mystery. 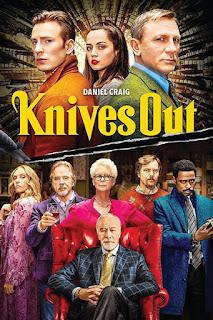 After the funeral of Harlan, his family returns to his home where Lieutenant Elliot (LaKeith Stanfield), Trooper Wagner (Noah Segan) and private investigator Blanc (Craig) are there to begin questioning everyone. Jamie Lee Curtis plays Linda Drysdale along with husband Richard Drysdale (Don Johnson).

Toni Collette, Michael Shannon, Frank Oz, Riki Lindhome and Katherine Langford round out the cast. Harlan’s nurse Marta (Ana de Armas) is among those being questioned and she announces right away she cannot lie without vomiting; which is quickly confirmed.

As each family member is questioned, it’s clear they have different motives. However, everyone’s stories matched; no one was unaccounted for. While on the surface, this seems like it could be an open and shut case, the detectives have a disagreement about the motives and how (or who) might have been involved in Harlan’s death. Blanc has suspicions regarding the case. Everyone had something to gain from Harlan’s death.

We travel back in time to Harlan’s 85th birthday party, the night before he died, and someone realizes a mistake was made.

Ransom Drysdale (Chris Evans), son of Richard and Linda, arrives just in time for the reading of the will. Blanc then tells the other detectives everyone had something to gain from the alleged murder of Harlan except one individual.

Part of what makes this a comedy is dry humor like this line:

“Think of a will reading as a community theater production of a tax return.”

Lines similar to this are featured throughout the movie.

The will reading doesn’t go as planned and tensions rise between the family members. It’s at this point that a revelation is made in regard to Harlan’s inheritance and this angers the family more and shows their real colors.

Blanc comes upon a clue which may help identify who might have been responsible for Harlan’s death. Blanc suspects foul play and has eliminated no suspects.

How did Harlan die? Who was involved? What about his inheritance? Who gets it?

Blanc identifies this mystery as a truly twisted web that needs much untangling. I found this to be a decent murder mystery, however, one that is a slow burn. I was interested to see where this was going and who might be responsible. I was satisfied with the ending, though this is a longer movie and drags in several places. The twists and turn make it worth the time though. The characters dry humor and wit lightens the sometimes tense scenes. I’d recommend this one. Two knives up – or out, your call.

Available on Amazon Prime and to rent. <

What if you fainted every time you felt a strong emotion? What if that emotion was happiness? Such is the case of real-life person, Matt Frerking, who this movie is based on. Frerking has narcolepsy with cataplexy. If he feels strong positive emotions, it can cause his brain to tell his body to go to sleep.

In writer Max Werner’s film, “Ode to Joy,” Martin Freeman plays Charlie, who has a very similar problem – any feelings of joy cause him to fall right to the floor. This fun movie is based on a piece done by WBEZ Chicago’s “This American Life” about Frerking and his condition. 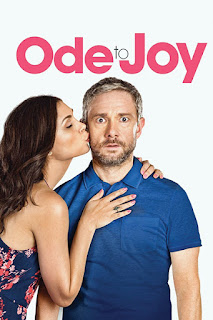 Charlie lives with his brother Cooper (Jake Lacy). Cooper has looked after his brother all their lives. Charlie, who has concocted ways to keep happiness out of his life, like wearing boring clothing to avoid compliments, or putting tacks in his shoes in an effort to feel pain and avoid joy. This changes when he meets Francesca (Morena Baccarin) who enters and wants to bring joy to Charlie’s life.

They meet when Francesca’s boyfriend dumps her in the library where Charlie works. His first impressions of her aren’t great, but after some coaxing from a co-worker, he decides to ask her out, but very carefully. She says yes and while their date goes well, it ends with Charlie in the hospital. He ends things with Francesca and suggests Cooper date her. Charlie later meets Bethany (Melissa Rauch), who is a little less exciting, and she and Charlie begin to date.

When the two couples spend a weekend at a bed and breakfast, it becomes clear that Charlie and Francesca have more in common. This weekend doesn’t go well, as both Charlie and Cooper get dumped.

Francesca lives with her aunt (Jane Curtain) who is battling cancer and understandably, this is hard on Francesca. When Francesca sees some gifts that Charlie bought for her, she realizes there might be a future. It takes some convincing from Cooper for Charlie to make the same conclusion.

Will Charlie and Francesca get together?

I’m sure you have already predicted how this ends. It’s not a hard prediction to make and the end might make you smile. This atypical rom-com is a feel good movie that’s only minimally sappy. On a sappy scale of one to 10, I wouldn’t give it more than three or four, tops. The plot moves along nicely and there are only a couple points where there’s a minor lull in the story. It won’t have you tearing up with laughter, but I thought it was pretty funny. When I learned this was a real thing that actually happened to someone, cataplexy, it made the movie interesting. “Ode to Joy” has a nice message about finding someone who accepts you for you. Two boxes of joyful tacks (or pushpins) up.

Available on Showtime or to rent. <