HBO Max’s ‘Ready or Not’ offers a surprise or two

I’m anxiously awaiting the arrival of ‘A Quiet Place Part II,’ so I was looking for a thriller that would keep me guessing and in some suspense. This was – well, I’ll get to that. 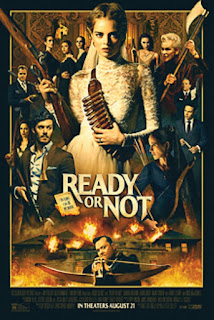 Grace (Samara Weaving) has just married Alex Le Domas (Mark O’Brien), part of the Le Domas Gaming Dominion. But before she is accepted into the family, at midnight, the night of the wedding, she and the other family members must play a game. This seems simple enough. As she sits around the table, some of the other spouses recount what games they played and they’re board games, nothing too complex. However, when Grace draws the ‘Hide and Seek’ card, it’s clear this isn’t going to be a simple as a game of checkers.

After Alex’s wedding ceremony, the Le Domas family is fairly unwelcoming right from the start. It’s very important to the father, Tony, (Henry Czerny) that the gaming tradition be kept going as the family is more than a little superstitious. They believe terrible things will happen if they don’t keep up this ritual.

After Grace draws her card, she asks Tony if there is any way she can win. He says, ‘stay hidden until dawn.’ It’s obvious this is not a friendly game of hide and seek. Alex does not play and does what he can to help Grace outsmart his relatives.

Right off the bat some unexpected things happen that I definitely did not see coming.

Grace does all she can to survive. And not everyone in the family is out to get her. She gets discovered several times, but each time is able to escape. She even steals a car at one point. Not to give too much away, but eventually Grace is captured. And here, a twist or two occurs. It gets gorier toward the end – kind of to excess. But maybe that was the point.

What happens to Grace and Alex?

What about the game of hide and seek?

Are the superstitions valid?

I’ll admit I was a little confused by the ending. I feel there are two possible routes that would have explained why what happened did happen. I had high hopes for this movie as the trailer made it look like a decent thriller.

The first act is very good – I was drawn in by this weird ritual and this strange, cold family. But by the second and third act it dragged a little and I found it less captivating.

The conclusion, while ok, isn’t as satisfying as I would have hoped for. A warning to the viewer: this is for some reason billed as a comedy/horror/mystery (on imdb.com) but I did not find it overly funny, aside from a few offhanded actions or comments. It is more violent and gruesome, with quite a bit of blood.

There were a couple parts that were hard to watch. There’s also language and drug use. If you’re looking for an edge-of-your-seat thriller, I didn’t think this was it.

But try it for yourself, what do you have to lose? <