You know his face and have probably heard his voice. Elmo is known by people of all ages throughout the world. But do you know the man behind this fury red monster? Kevin Clash has had an interest in puppetry since he was very young. This documentary shows you how Kevin got started and eventually met Elmo and the impact the two have had on so many.

“I didn’t know this was going to happen,” Clash said at the beginning. He had always dreamed of working with the Muppets. He was captivated by television and was a fan of the Wonderful World of Disney and Captain Kangaroo. 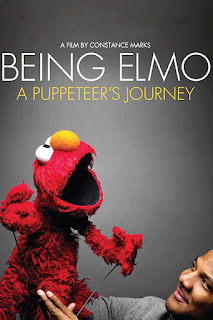 Clash loved Sesame Street from its very first airing in 1969. He wondered how the puppets were made and who was controlling them. He became immediately fascinated by the work of master puppeteer Jim Henson and whenever Henson had a special or a TV show, Clash was watching. He wanted to be a part of what Henson was doing.

Curiosity overcame him one day and he made a puppet out of his father’s coat. He was afraid of how he might react, but all his father said was ‘next time, just ask.’ From that point forward, both of his parents were extremely supportive. Clash began making his own puppets and performing at neighborhood puppet shows and for the children in his mother’s daycare. He had a gift and a dream. A dream that he stuck with from that point forward until today.

His first break came when he got on a Baltimore’s Channel 2 show called ‘Caboose.’ Now TV was more than entertainment, it was research. Clash watched the Muppet Show to try and figure out how to be as good as those puppeteers. He reached out to Kermit Love, who worked with Henson, and Love invited Clash to visit him in New York City. On a class trip, Clash met Love and was able to learn more about building and controlling puppets.

As Clash got better and better, people began to notice him, his skill and love for puppetry. He got a job working on Captain Kangaroo and brought Cookie Monster to life during a Macy’s Thanksgiving Day Parade. He soon was asked by Henson to work on the movie ‘Labyrinth.’

Afterwards he met Elmo, who was a little different than the Elmo of today. As the years went on, Kevin realized what a difference Elmo was making and how happy he made children. Elmo was quickly a sensation. Now, Clash is in high demand and has earned more responsibility on Sesame Street; the mentee has become the mentor.

This was a feel-good documentary. I never thought about the voices behind the Muppets because they are so life-like and well done. Learning more about Kevin Clash and getting a small peak behind the curtain as to what it’s like to be a puppeteer was interesting. My niece is a big Elmo fan and I think it’s pretty cool that Clash is still making a difference for a brand new generation. I recommend any fan of Elmo, no matter the age, watch this documentary. Two red fury thumbs up! <

Narrated by a cat (Ricky Gervais), Netflix’s computer animated tale tells of four children who have less than desirable parents.

Father (Martin Short) and Mother (Jane Krakowski) are madly in love with each other, but there’s one thing they don’t love: children. Yet, they have four: Tim (Will Forte), Jane (Alessia Cara) and twin boys, both named Barnaby (Sean Cullen). 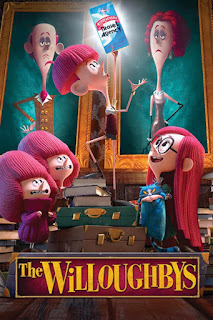 Willoughbys were soldiers, scientists, explorers, kings, philosophers, aviators and artists – until Father and Mother. The children are often told to be quiet, aren’t fed from day to day or are thrown into the coal bin for lengths at a time. Against all odds, the children still have determination, imagination and hope.

One day, Jane finds a box with a ‘beast’ in it. It’s not a beast, it’s a baby. Jane wants to keep it, but the parents say ‘no.’ Instead, the father kicks all the children out of the house. The children, wanting to restore honor to the House of Willoughby, bring the baby to, what they say is the perfect home: Commander Melanoff’s (Terry Cruz) candy factory. He happily accepts the baby, who gets named Ruth – get it?

Later on, the children hatch a plan to send their parents away because they think they’d be better off without them. So, they design a fake travel agency brochure. Little do the children know, their parents have a similar plan to hire a really bad, really inexpensive nanny in hopes to drive the children away. That’s not exactly what happens, though.

The Nanny (Maya Rudolph) sees how terrible the parents have been to Tim, Jane and the Barnabys. Jane tells the nanny about Ruth and they go back to Commander Melanoff’s factory, where he tells them he wants Ruth to stay. The candy man is a family man.

The parents are enjoying themselves so much, they decide they’re not going to return and will be selling the Willoughby home. With the realtor chomping at the bit to make this sale and people lined up from all around, the children boobytrap the house to drive buyers away. They even scare away the perfect family.

In a darker moment of the film, Orphan Services splits up Tim, Jane and the Barnabys because they believe a bad nanny has been caring for them. This couldn’t be farther from the truth.

With the entire family split up, will they ever get back together?

Do they need each other?

What about the parents?

Although this movie has several dark moments, it does have a powerful message: the importance of families, that come in all shapes and sizes. With its all-star cast, it stresses teamwork, adventure and when all seems lost, you never know what will happen; ‘the best stories are in the windows nobody looks in.’

It’s a clever movie that I think works on a level for kids and adults. While this wasn’t the best movie I’ve ever seen, I think it’s a nice for a movie night. I give it one and half pink mustaches up. <

Have you ever watched a movie and thought ‘I wonder how they made that prop?’ Or ‘I wonder where that prop came from?’ Well, Disney+’s Docuseries ‘Prop Culture’ sets out to answer some of those questions. This half-hour eight episode series, is hosted by prop collector and cinephile, Dan Lanigan, as he travels all over the country finding and learning about props from ‘Mary Poppins,’ ‘Tron,’ ‘The Nightmare before Christmas,’ ‘Pirates of the Caribbean: Curse of the Black Pearl,’ ‘Honey I Shrunk the Kids,’ ‘Chronicles of Narnia: the Lion, the Witch and the Wardrobe,’ ‘Who Framed Roger Rabbit?’ and ‘The Muppet Movie (1979).’
Lanigan brings parts of his collection to each episode and talks with individuals who worked on that movie about their experiences and what they remember from designing the various props. Despite the immense popularity of many of these movies, many of the props are hard to find or non-existent. 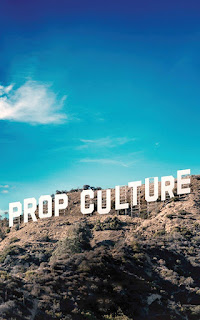 What I learned from watching this series is that after a movie is finished shooting, props can be thrown away, save for a few special pieces members of the crew might take.

In the first episode, Lanigan tries to track down the original umbrella used in ‘Mary Poppins’ and Disney designer Kevin Kidney states he doesn’t know where the original is. However, he has plenty of replicas and recreations of the famous umbrella with the parrot head.
In the ‘Nightmare Before Christmas’ episode, you learn that sketches from Tim Burton had this originally as a stop motion short film. One of the very cool pieces you see in this episode is the original Jack Skellington which was created in 1982. You also get to see the Santa Jack prop, in his sleigh with his ghostly reindeer – which is very cool. A fun fact about this movie: there were 227 puppets made to make ‘Nightmare Before Christmas.’
Set in 1947 film noir Hollywood, ‘Who Framed Roger Rabbit?’ is a fan favorite. Lanigan sees early versions of Roger and learns Jessica Rabbit was based off actress Lauren Bacall. Plus, you see the venetian screen prop that Roger ran through, leaving a Roger shaped hole in the screen.
Lanigan talks with Brian Henson, son of Jim Henson, as he gives behind the scenes information about his dad working on ‘The Muppet Movie.’ Lanigan tracks down the van the Electric Mayhem traveled in and has an interview with Gonzo the Great, after Lanigan finds some of Gonzo’s original clothing from the movie. Plus, the episode ends with a reveal of a special prop used by a well-known frog.
Being a collector myself, it was very cool to see pieces from Lanigan’s collection and hear about many of the props from these iconic movies. The interviews from the people who worked on the movies are interesting. It’s fun to find out how they controlled certain creatures or characters in a time before computer generated imagery (CGI). If you’re looking for a series that semi-educational and entertaining, I recommend this one. Jack Skellington gives it two thumbs up.