Ben Affleck gives moving performance in 'The Way Back'

By Matt Pascarella
Jack (Ben Affleck) is a former high school basketball star who, after suffering a personal tragedy is struggling and needs to find something that gives him purpose.
During Thanksgiving, his sister, Beth (Michaela Watkins) expresses concern about him and tells him his ex-wife, Angela (Janina Gavankar) has also expressed concern. This only puts Jack on the defensive. 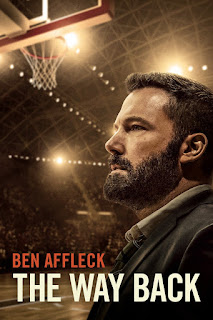 Later on, Jack receives a call from Father Edward Devine (John Aylward) the priest of his former high school, Bishop Hayes, who tells him their current basketball coach won’t be able to coach this season and when it came to a replacement, Jack was the first person Father Devine thought of. The team is not doing well; they haven’t played well since Jack played, which was over a decade ago.

At first, Jack is not interested in coaching, but eventually accepts the position. He meets his assistant coach Dan (Al Madrigal), who gives him a rundown of each of the players. The team needs work.
After one game in which Jack does a lot of cursing, the team chaplain (Jeremy Radin) speaks to him and tells him his actions and language have a tremendous effect on his team. This makes Jack rethink some of his daily habits, like going to the bar so much. After a lot of hard work and a somewhat bumpy start, the team begins adding some wins to their record. And they keep those wins going. During this time, Jack is also becoming a mentor to one of the players (Brandon Wilson) who is good but lacks confidence.
While attending a birthday party, we learn a little more about Jack’s personal life and past. And where a lot of his anger has come from. His anger gets the best of him one night and he is thrown out of a game. Dan has to fill in for him.
As the season progresses, Jack’s team is headed towards the playoffs. They need to win a big game against a tough team, that beat them earlier in the season, in order to make it.
Something happens to make Jack slip back into his old ways, where he begins drinking more and more. He shows up late to a practice and afterwards Dan approaches Father Devine who kicks Jack off the team for consuming alcohol on school grounds and showing up to practice inebriated.
What happens to Jack after he’s kicked off the team?
Will the team make the playoffs?
What does the future hold for the team without their head coach?
This has been on my ‘to-watch’ list for several weeks. It looked like a Hoosier-esque, feel good movie. And in spots, it is. But the spots are few and far between. There were several key moments that left me wanting more. And there were other moments that weren’t super clear to me. Is this movie worth renting? Maybe, if you really want to see it, but otherwise you could easily leave this one on the bench until it’s available to you. <