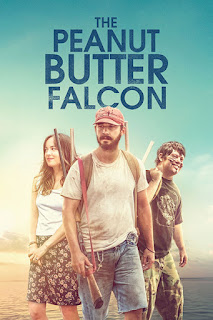 If you could use a feel-good movie, then look no further than “The Peanut Butter Falcon”. It is a story of friendship, acceptance and breaking the mold.

Zak (Zack Gottsagen) loves wrestling, has down syndrome and lives in a nursing home. His ultimate goal is to meet wrestler ,The Salt Water Redneck, who has a wrestling school and produces a video from that venue. Zak watches this video.

Zak has made several attempts to escape the nursing home, but always gets caught. Eleanor (Dakota Johnson), an employee of the assisted living facility, has told Zak he can’t keep doing this. This doesn’t stick with Zak. One night with the help of his roommate, Carl (Bruce Dern), Zak is able to escape without being caught. Zak hides in fisherman’s boat.

That fisherman, Tyler (Shia LaBeouf) is struggling to make a living with his career as an angler. He recently lost his brother and he steals the traps of some other fishermen, Duncan (John Hawkes) and Ratboy (Yelawolf). Things get worse when, later, he sets their traps on fire. Duncan and Ratboy chase after Tyler and he runs away from them and to his boat. Be when Tyler arrives, he is unaware Zak is hiding in his boat. Once Tyler discovers Zak is in his boat, he agrees to let him tag along. Tyler is going to Florida and Zak is going to North Carolina, home of The Salt Water Redneck’s wrestling school. Tyler is sort of mean to Zak when they first meet. Zak tells Tyler ‘I want you to know about me; I am a down syndrome person.’

Tyler stops at a convenience store and inadvertently meets Eleanor, who is looking for Tyler after her boss, Glen (Lee Spencer) tells her to find Zak after refusing to report Zak missing. Tyler sees if there is a reward for Zak, but never fully admits to knowing where he is.

Tyler tells Zak he saw Eleanor and she’s looking for him. After this, a friendship begins to develop between Zak and Tyler.

Tyler encourages Zak and teaches him how to swim. You also learn some of Tyler’s backstory. The two meet Jasper (Wayne Dehart), a clergyman who lets Zak and Tyler build a raft. One night, they practice wrestling moves and Zak dubs himself ‘The Peanut Butter Falcon.’

Eleanor eventually finds Zak and tells him they need to go back to the nursing home. Zak tells her he wants to see The Salt Water Redneck. After some disagreeing, Eleanor joins the group and actually has fun.

Later, Jasper and Ratboy set their raft on fire. They threaten Tyler and Zak comes to his aid.
What will happen to the Tyler, Zak and Eleanor?

Will he have to go back to the nursing home?

With an energetic soundtrack and uplifting story, this movie will put a smile on your face. It’s funny and the end was unexpected. I hope we see more movies with Zack Gottsagen because he was fantastic and I am not a Shia LeBeouf fan, but he was pretty good in this. With so much negativity out there, this movie will give you a glimpse of hope. Highly worth the rental; two peanut butter covered wrestling masks way up.

Posted by The Windham Eagle at 2:16 PM No comments: 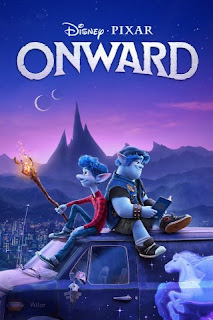 Do your kids (or yourself) need a break from social distance learning? Or maybe a suggestion for the fourth or fifth family movie night this week? “Onward” is a decent family movie with messages about believing in yourself, overcoming fear(s) and the importance of family.

It starts ‘Long ago the world was full of wonder. There was magic, which was hard to master, and the world found a simpler way to get by. Over time, the magic faded away.’

Ian Lightfoot, (Tom Holland), an elf, is turning 16. He and his older brother, Barley, (Chris Pratt) lost their father an undetermined amount of time ago. Ian and his brother are polar opposites: Barley has no fear and Ian is afraid of a lot of things.

While out in public, Ian meets a guy who tells him how great his dad was and how sorry he was to hear about his passing. After meeting this guy, Ian makes a list entitled ‘New Me’ to try to step out of his comfort zone. The final item on his list is ‘be more like Dad.’

He starts by inviting some classmates of his to his birthday party but retracts their invitation when he embarrasses himself.

Ian’s mom, Laurel (Julia Louis-Dreyfus) gives both her sons a gift from their father; a magic wand with a spell that can bring him back for only 24 hours. The spell doesn’t work – then it kind of does, leaving only a portion of their dad. They need a phoenix gem to complete the spell. Barley and Ian go on a quest to finish the spell, find the gem and get to spend some time with their dad.

Once Laurel learns what they are doing she goes after them.

Along their way, Barley and Ian meet the Manticore (Octavia Spencer) a mythical Persian legendary creature.

Barley’s van, Guinevere, runs out of gas and the two get into a bit of trouble. Barley helps his brother conquer some of his fears about driving. At one point they cross an invisible bridge and after being chased by the police, reach what they thought is their destination, but they are right back where they started.

Will they find the gem and get to meet their dad before the 24 hours is up?

With an all-star cast, this movie is another Pixar homerun. Toward the end, they really keep you guessing as to whether Ian or Barley are going to see their dad. The end result is not what I thought it was going to be. This was a funny, heartwarming movie that works on a level for both kids and adults, though it’s not as good as “Toy Story” or “Monsters, Inc.” I’d recommend this movie. Two magic wands up.

Posted by The Windham Eagle at 11:29 AM No comments: 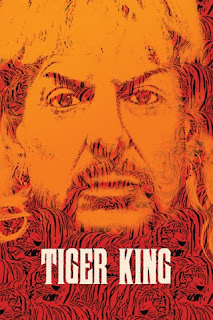 The first episode of Netflix’s seven episode limited series is crazy from the start. There’s a lot going on. It opens with the quote “Not every day a zookeeper went to prison for murder-for-hire.” “Tiger King” is about the life of Joe Schreibvogel, who later became Joe Exotic and his contentious relationship with Carole Baskin, owner of Big Cat Rescue who wants to close down Exotic’s G.W. Zoo.

Filmmaker Eric Goode begins filming in Homestead, Florida where people are running zoos with exotic animals. Joe Exotic runs the G.W. Zoo, where he has over 100 exotic animals.

We meet Carole Baskin who runs Big Cat Rescue Sanctuary and believes Exotic is exploiting tigers and other big cats and wants to shut him down. Exotic has made a lot of money with big cats, bringing them to malls and using them in his zoo. The first episode ends with a threat from Exotic against Baskin.

The following episodes recount various things that happen around the time period this documentary series was being filmed. Some are horrific, like a suicide or an employee of Exotic’s losing an arm; you also meet many of the other individuals involved and most of them are somewhat bizarre characters.

You learn about Joe’s business and some of his suspect practices, all told through the individuals who worked for Joe. You learn a bit about Carole Baskin, who had a husband disappear and is now presumed dead. Throughout these episodes, Joe and Carole’s feud gets nastier and nastier. Joe has some financial trouble and ends up signing over his zoo to Jeff Lowe. From there, it just gets worse.

There are several twists and turns and events or revelations I wasn’t expecting. “Even if it’s a train wreck, you can’t help but look,” this is said late in the series and perfectly describes the Joe Exotic saga – you see it going downhill and you want to see what happens.

What is the outcome for Joe Exotic?

What happens to Carole?

Is there more I’m not telling you?

I was not really sure why there was a documentary about this guy and wasn’t impressed, initially. However, I could not look away. This is a very captivating series. It is hard to watch at points, but at the end of each episode, I needed to know what was going to happen to this guy; what was he going to do next? Parts of it are very in-depth and the whole series, in my opinion, probably could have been a 90 minute movie – if it was solely about Joe’s murder-for-hire case. There are a lot of strong personalities in this series, which is part of why I found it so interesting. Some of them you could swear are right out of a crazy movie, instead of real life. Heads up to the viewer: there are a few hard to watch parts and some animals being mistreated. Recommended.

Posted by The Windham Eagle at 12:31 PM No comments:

Entertainment tonight: Looking for something new to watch? 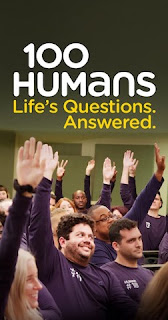 If you’ve come pretty close to exhausting your Netflix queue while you are socially distancing yourself, here are a few Netflix suggestions that I deem ‘binge-worthy.’

“Black Mirror”
I realize I’m late to the game on this one, but it’s very good. Each episode stands alone and usually has to do with technology. It tells a story and has a twist at the end. Similar to the “Twilight Zone”. Five seasons.

“Good Girls”
This NBC show is in it’s third season and there are two on Netflix. Three women (Christina Hendricks, Mae Whitman and Retta) decide to rob a bank and then things spiral downward from there. They get in over their heads and need to figure how to get out. The third season is currently streaming on Hulu.

“100 Humans”
This is a fun show where you might learn something, too. Three individuals answer various questions like, ‘can good looks keep you from jail?’ or ‘is praise better than criticism?’ OR ‘is the last name effect real?’ They answer these and other questions showing data to back up their answers.

“The Toys That Made Us”
Remember “He-Man”? “Ninja Turtles”? “My Little Pony”? “Hello Kitty”? Were these toys from your childhood? Maybe some you still have? Or maybe your kids play with now...
Regardless of whether you had these toys, get the stories behind them in this fun three season show. The creators and designers talk about starting the various toy lines, how the public reacted, etc.
Oh, and of course they talk about “Star Wars”.

“LEGO Masters”
Ok, this particular show is on Hulu, but it’s a good one. Various teams, with one eliminated each week, participate in challenges like, designing a city, building a movie genre, designing a bridge to see how much weight it can hold (the winning answer will surprise you) or designing a mad lib from a child’s imagination. It’s just a fun show.

“Better Call Saul”
This one is on Netflix and is a little darker than the previously mentioned. If you liked Vince Gilligan’s “Breaking Bad”, “Better Call Saul” is a great prequel. Find out how shady lawyer Saul Goodman became who he is. I found myself needing to know what is going to happen next, which is perfect, especially if you can watch one after another. Oh, and you might see a character or two from the ‘Breaking Bad’ universe.

"The Office"
Shot documentary style, even if you’ve seen this more than once (or more than twice) this is just good TV. You’ll laugh, you might cry, you’ll enjoy yourself. Watch it before NBC pulls it off Netflix.

Posted by The Windham Eagle at 12:52 PM No comments: