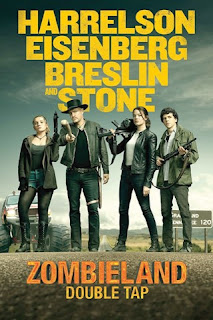 Way, way back in 2009, we were introduced to four characters in a post-apocalyptic world. They were running from (what else), zombies, and choose to identify themselves by where they were from. The first ‘Zombieland’ is very funny and worth watching, but all you really need to know to watch the second film is that Columbus (Jesse Eisenberg), Tallahassee (Woody Harrelson), Wichita (Emma Stone) and Little Rock (Abigail Breslin) are still alive ten years later. This movie is called Double Tap, because that is one of the many rules explained throughout both movies.

‘Zombieland: Double Tap’ is funny from the moment you see the image for Columbia Pictures. It begins with Columbus identifying a few types of zombies they’ve discovered through the years.
The group is currently living in the White House and it is described that they were a family making everyday feel like Christmas. Little Rock, the youngest in the group, expresses that she would like to leave and look for people her own age. Wichita and Little Rock leave Columbus and Tallahassee.

Very soon after, Columbus meets Madison (Zoey Deutch) who has been living in a refrigerator at a mall. A little while later, Wichita returns and tells the others Little Rock met a boy, Berkley (Avan Jogia), and they took off together. Madison, Wichita, Columbus and Tallahassee all go looking for Little Rock.

They head to Graceland, because they had all talked of going there, but when the four get there, it’s not as they expected. In a nearby motel (Elvis-themed, of course) Tallahassee meets Nevada (Rosario Dawson).

Meanwhile, Little Rock and Berkley have gone to the pacifist, gun-free, setting of Babylon.
The group meets Albuquerque (Luke Wilson) and Flagstaff (Thomas Middleditch), and what follows is nothing short of mayhem.

Everyone eventually finds Babylon and Little Rock – and after they do - Tallahassee decides to separate from the group, but quickly changes his mind when he sees a hoard of zombies coming for Babylon. Can the group get rid of these zombies before they reach Babylon? Will there be any casualties?

With an all-star cast, Zombieland: Double Tap is fun from start to finish. It reminded me of a much funnier version of the TV show, “The Walking Dead.” They both have a similar premise and similar scenery. This movie is very violent and gruesome, with a lot of blood and some salty language.

Harrelson and Deutch are great. With clever lines like ‘the King [Elvis] is dead...probably’ along with a surprise here and there, this is the perfect zom-com pre or post Halloween. I give it two zombie limbs, of your choice, up.

Oh, and don’t leave right after the movie; stay for the credits – you won’t regret it!

Posted by The Windham Eagle at 2:00 PM