I love anything directed by Steve McQueen, so last Friday night I couldn’t help myself when I passed the RedBox at Hannaford and realized “Widows” was available to rent. This movie is available on Redbox at most locations in the Southern Maine area. 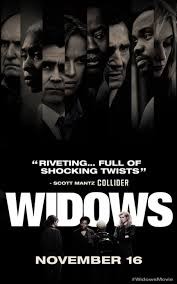 “Widows” is a 2018 heist film and it stars popular actors such as Colin Farrell, Robert Duvall, and Liam Neeson. The plot follows a group of women who attempt a heist in order to pay back a crime boss after their criminal husbands are killed on a botched job.

The plot goes something like this: Harry Rawlings (Liam Neeson), a renowned thief, is killed alongside his partners Carlos (Manuel Garcia-Rulfo), Florek (Jon Bernthal), and Jimmy (Coburn Goss) during a botched robbery. His widow, Veronica (Viola Davis), is threatened by crime boss Jamal Manning (Brian Tyree Henry), from whom Harry and his partners robbed $2 million. Jamal needs the money to finance his electoral campaign for alderman of a South Side ward, where he is running against Jack Mulligan (Colin Farrell), the next-in-line of the racist Mulligan political family who have historically dominated the alderman position.

Basically, “Widows” is a heist movie that contains mayhem and a plot that contains too many twists and turns to count. It also contains grief, dread and desperation rather than the more popular movie themes of greed, ambition and rebellion.

“Widows” gives this world not only what it needs, but also what a lot of people are looking for in today’s culture and that is a film based around a group of strong and independent women. Veronica, Linda, and Alice, once dependent on their husbands, must take matters into their own hands in order to clean up the mess left by their spouses, reclaiming their independence. They are joined by single mother and Linda’s babysitter Belle. Together they attempt to complete what would have been their husbands’ next job in order to pay their debt and move on with their lives.

The filmmakers don’t really care about the money, politics, or strict rules.

According to other reviews, “a viewer expecting a jaunty fable of female empowerment along the lines of “Ocean’s 8” is likely to be nonplussed by the abstraction and melancholy of this film. But those are also its most surprising and interesting traits. It may lack the energy for fun, but at least it has the nerve to be sad.”

My perspective is that the film breaks the norm of what it means to make a heist film and rather than the fun and more light-hearted nature of the “Ocean’s” franchise, “Widows” is a serious film full of suspense. It deals with racism, corruption in politics, crime and the lengths a person will go to in order to save themselves and especially their reputation. A fair warning goes out to the faint of heart as this film is quite graphic and frightening, however, Director Steve McQueen does a phenomenal job of keeping it tasteful and sophisticated in this piece auteur cinema.