I’ll dispense with the formalities as Tom Hanks needs no introduction. He may have aged but his acting abilities have not. The same applies to director Ron Howard. Both Academy Award winners have been an integral part of the film’s success. This is Dan Brown’s fourth book of the Robert Langdon's saga but the third one to be adapted for a film. In this installment protagonist Langdon (Hanks) wakes up with amnesia in the heart of Italy. 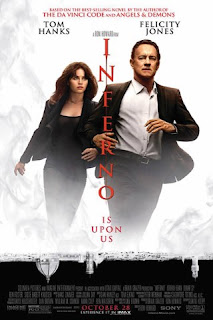 A series of action scenes accompany his presence as well as his condition which I thought compelling and believable. I don’t like waiting for action scenes that I know exist somewhere in the plot so this immediate introduction I found pleasing. It also had me on the edge of my seat. These opening scenes are fueled by a mysterious woman in pursuit of Langdon. His escape eminent, he flees the hospital in the company and with the aid of his doctor Sienna Brooks played by Felicity Jones (A Monster Calls-2016). Interestingly, in the book it is revealed that Sienna's actual first name, which she abandoned as a child, is Felicity. In the movie, she is played by actress Felicity Jones.

The timing of Langdon’s slow recovery of amnesia and being drawn into a world centered on one of history's most enduring and mysterious literary masterpieces: Dante's Inferno, was well integrated with an ingenious riddle that draws him into a world of classic art, secret catacombs, and futuristic science that elevate the plot and keeps it flowing seamlessly, thanks to writer Danny Strong (“Empire” TV series and The Hunger Games: Mockingjay).

Irrfan Kahn’s (Jurassic World-2015) performance left me wondering whose side he was really on; as did Omar Sy, who also was in Jurassic World. Add into this mix Sidse Babett Knudsen (Westworld-2016) and what develops is a collage of motives that eventually gel and make sense.
Composer Hans Zimmer, responsible for the music of all three films, kicks it up a notch to accentuate key scenes adding to what I thought was a well spent two hours watching this film. Of the three produced, this is by far my favorite.

I was not swayed by the industries competition on the same release date. I recommend movie goers do the same. This is Sony's second best international opening in October. Enough said.
Posted by Michelle Libby at 2:00 AM