The first of seven superhero films set for release in 2016, Deadpool is also the first stand alone movie for the titular comic book character from the X-Men series. Prior to this, our only film adaption of this popular character was found in 2009s X-Men Origins: Wolverine. Although Ryan Reynolds was perfectly cast in the role, the filmmakers decided to sew his mouth shut as one of the many mistakes in that disaster of a movie. Luckily, six years later we finally get to see Reynolds reprise his role the way it was meant to be. In addition, alongside movies like Kick-Ass and Watchmen, Deadpool is one of the only R-rated comic book films out there. Anyways, all of these aspects coupled with some perfect marketing had me pretty excited for this movie. 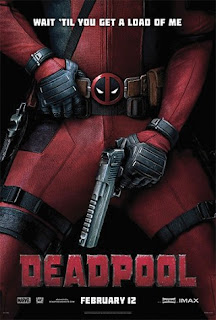 Because this film is such a unique first time experience, I will keep my summary brief. However, I will say it is important to know that this story is told in a nonlinear fashion. Ultimately, Deadpool tells an origin tale of man named Wade Wilson who turned from a Special Forces operative to a mercenary. After he is diagnosed with cancer, Wade undergoes an experiment that ends up leaving him with superpowers as he turns into his alter-ego, “Deadpool”.

Now, Deadpool may simply sound like your stereotypical superhero movie; it is not. This is a completely satirical film that takes those cultural clichés and flat out makes fun of them. Now, this may seem as if it's just an average spoof movie; it is not that either. Deadpool is an absolutely unique film as it tells this seemingly simple story in the most entertaining way imaginable. The extreme action sequences were an absolute visual feast. Couple that with a surprisingly touching love story and I don’t know what else you could ask for in a movie like this. Even the acting was outstanding, especially Ryan Reynolds with his brutally hilarious narration of our title character. I can honestly say that Deadpool is the best superhero film I have seen since 2014’s Captain America: The Winter Soldier, which is really saying something if you look at what came in between. All I can say is good luck to the rest of the 2014 superhero flicks, because Deadpool jump started this year with a well needed breath of creative storytelling that we haven’t had in a long, long time.

By Emily Maier - Pride and Prejudice and Zombies depicts 19th century life plagued not only by classism, but by the undead as well. To combat these foes, the film unveils Elizabeth Bennet (Lily James), an independent young woman proficient in the art of zombie slaying. As she fights alongside Darcy (Sam Riley), they gradually learn to let down their walls of bias and vanity in order to fight against a common enemy.

Pride and Prejudice and Zombies is the comedy horror adaptation to Seth Grahame-Smith’s novel of the same name. Like the title suggests, Seth’s book is a parody to Jane Austen’s Pride and Prejudice, written in 1813. The movie did embellish quite a bit to formulate the plot – even when compared to Seth Grahame-Smith’s version of the book – but at the center of the film is still the skeleton of Jane Austen’s work. Even though the original themes start to get muddled due to all the additional components, the movie still manages to criticize the time period’s ideas surrounding gender relations and social classes.

I’ve been in love with Seth Grahame-Smith’s work since 2012, ever since I first saw Abraham Lincoln: Vampire Hunter. It’s my all-time favorite guilty pleasure, so I was hopeful I’d find another movie I could indulge in with Pride and Prejudice and Zombies.

Upon leaving the theater, I wasn’t too let down. The movie was much stranger than I was expecting – which says a lot, considering that I was already expecting Seth Grahame-Smith’s brand of weird. All in all, it’s hard to review Pride and Prejudice and Zombies seriously because the movie wasn’t meant to be viewed seriously.

I was ultimately disappointed with the gore factor. Though there was action throughout, the scenes were brief and largely spread apart. There were a couple instances that made me jump, and while a few zombies were particularly grotesque, the film didn’t dabble too much within the horror genre. After all, the movie is still based on a romance novel, so I’m not quite sure what more I was expecting.

Unfortunately, the film seems to have caught a limited audience, which is understandable, considering there’s not much overlap between Jane Austen readers and zombie fanatics. But for the right person, Pride and Prejudice and Zombies is a fun ride that offers an original twist on a classic tale.
Posted by Bob at 9:37 AM No comments:

There’s a moment in The Boy in which our protagonist essentially exclaims, “Oh, wow! This doll is alive! I knew it!” Even more peculiar is that it occurs only seconds after proving her suspicions to a new friend, with his excitement somewhere along the lines of, “Hey, that’s pretty neat!” It’s not until later that night that they suspect this “living” doll might be something they should fear. However to us, the viewer, we’ve received plenty of visual and audio clues from the very beginning to know that this doll means harm.

The aforementioned doll, a petite, porcelain version of a child, fills the part of the titular boy. With hollow features and an eerie pallor, the doll exists as a coping device for an older couple (Jim Norton and Diana Hardcastle) who lost their son 20 years prior.

Lauren Cohan, of “The Walking Dead” fame, plays the role of Greta Evans, an American who answers an ad from across the pond and arrives in the UK to become the boy’s caretaker. Much to her surprise, she doesn’t learn that The Boy is a doll and not a real child until her arrival at the Hillshire family estate.  Left with a set of rules and told that they must be followed in order to keep the boy (named Brahms) happy, Greta quickly dismisses them and assumes the older couple is just off their rockers; as long as she stays and makes them think she took their doll seriously, she can easily collect the payment she’s travelled all that way for. Not long after straying from the rules, however, Greta learns that the couple wasn’t kidding—the doll has a life of its own.

As part of the plot device, Greta only gets confirmation of the living doll when she can’t see him: She hears his little footsteps and crying from another room; she draws a chalk outline around him and when she returns, he has moved from it, etc. The truth behind the doll’s ways is explained toward the end in a rather twisted fashion, but the reveal isn’t fleshed out enough and leaves the whole story seeming rather anti-climactic. Even with its flaws, director William Brent Bell makes a flick that contains enough creepy moments to warrant the price of admission. This isn’t Bell’s first horror movie (Wer, The Devil Inside, Stay Alive), but it’s certainly his most mainstream piece to date. If you can handle the ridiculousness of a storyline that revolves around a killer doll, then The Boy should make for a fun date night at the movies.
Posted by Bob at 10:00 AM No comments:

Set in 1952, The Finest Hours recounts the true story of one of the most dangerous Coast Guard rescues in history. When a raging storm splits the SS Pendleton in half off the coast of Massachusetts, the oil tanker only has hours left before it sinks entirely. Led by Ray Sybert (Casey Affleck), the crew works rapidly in order to buy themselves some time aboard the dying vessel. Meanwhile, local Coast Guard crewman Bernie Webber (Chris Pine) braves the open ocean to come to their aid. 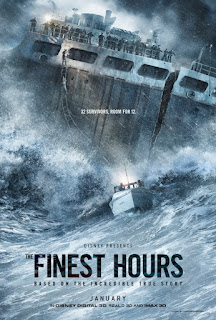 Unfortunately, The Finest Hours was not the finest movie. Its biggest pitfall by far was the drama away from the ocean, which was downright painful to watch. When you go into a movie about seafaring in a deadly storm, the clunky romances and squabbles back on land are just as unexpected as they are unwanted. The main plot was continuously getting bogged down by the cliché courtship between Bernie Webber and his fiancée, as well as multiple mentions of a past failed rescue attempt. The latter was mainly troubling because it made Bernie’s desire for self-redemption begin to eclipse the real goal: Saving the 32 lives aboard the SS Pendleton.

The character development throughout the movie felt forced, which was especially surprising given the noteworthy cast. It felt like they were too focused on trying to assert that their characters were ‘real people’, when they should have been focusing on giving engaging performances. However, this is mostly the fault of the director and writers. Overall, the cast seemed to be doing the best they could with what they were given.

I hate to typecast, but frankly, Chris Pine’s role felt disingenuous. Having Chris Pine play the awkward, timid skipper was about as weird and uncomfortable as the time Toby McGuire tried to play the confident, alluring villain in Spider-Man 3. You know what scene I’m talking about. Then there was Webber’s fiancée, played by Holliday Grainger, whose character was especially unoriginal. I get what they were going for – the independent woman unfazed by a society run by men – but her character was severely lacking in substance.

On a positive note, the visuals did gain back some brownie points. The scene where Josh Stewart’s character is going to talk to the ship’s captain, only to find that half of the tanker is just gone, gave me chills. The tense score by Carter Burwell, combined with the 70-foot CGI waves add up to some very stressful sequences. So, in this aspect, the film did do a good job of expressing the uncooperativeness of nature. But this theme can only carry the movie so far, especially since it seems familiar and overused, particularly with the recent showing of The Revenant.
What The Finest Hours came down to was a disjointed mesh of a daring rescue mission and a sappy romance, hastily plastered together with a few recycled motifs. If director Craig Gillespie had stuck to what was happening on the oil tanker, the movie would have been much more captivating. It’s a shame that the incredible story didn’t produce an amazing film, because it definitely deserved it.
Posted by Michelle Libby at 2:00 AM No comments: