For over forty years, Stephen King has built a dynasty in the world of literature. Countless classics have formulated, with many being made into notable film adaptions. Call him the Master of Horror, or just a guy from Bangor with a serious imagination, but there's one story about a vampire-infested town in Maine that rivets readers every time. 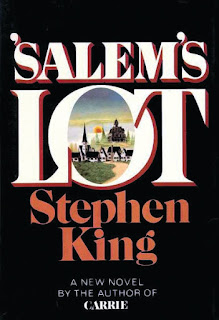 “’Salem’s Lot” is the story of Ben Mears, an acclaimed author who grew up in the fictional town of Jerusalem's Lot, which is said to neighbor Windham, Cumberland and Falmouth. Mears has returned to write his newest book about the Marston house, which lies on top of a hill overlooking the Lot. The house holds eerie legends ranging back to the original owner and Depression-era hit man Hubert Marston, in the 1940s. The estate has now been bought by Kurt Barlow, an Austrian immigrant who has opened a store in town. His business partner, Richard Straker, is the only one of the two seen in public. Soon, townsfolk begin to go missing, people start turning into vampires, and it's up to Ben Mears along with a few brave patrons to make things right.

“’Salem’s Lot” is my favorite Stephen King novel, and also my favorite book of all time. Throughout the novel, King is able to poetically pinpoint different facets within the storyline, and issues the characters face. This is a story that is so well-done that I found myself literally sitting on the edge of my seat to see what would happen next. Early on, King paints a portrait of a small, fall-time Maine town, and while not making his intention to scare readers obvious, the element of eeriness is sincere and underlying. This is Stephen King at his finest; I would highly recommend “’Salem’s Lot”.

Posted by Michelle Libby at 6:47 PM