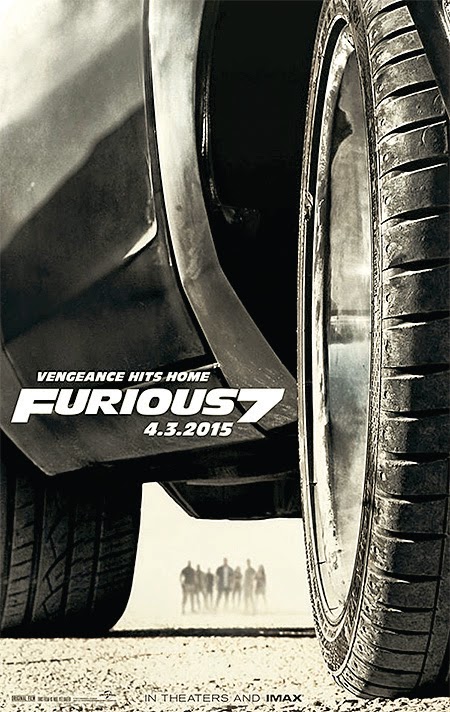 Furious 7 is the latest installment in the Fast and Furious film franchise, following 2013’s Fast and Furious 6. This movie is directed by James Wan and has a star studded cast featuring returning members such as Vin Diesel, Paul Walker, Dwayne Johnson, Michelle Rodriguez, Jordana Brewster, Tyrese Gibson and Chris “Ludacris” Bridges as well as new recruits Jason Statham, Kurt Russell and Djimon Hounso. As a big fan of the series, I was extremely excited for yet another movie, but also curious to see how the filmmakers would handle the character played by Paul Walker, who sadly passed away in a tragic car accident back in 2013. In the end, I think that Furious 7 is one of the strongest installments in the franchise, but above all, an emotionally touching sendoff to a truly beloved Hollywood star.

In the previous film, Dominic Toretto (Vin Diesel), Brian O’Connor (Paul Walker) and the rest of their crew of drivers managed to take down an international terrorist named Owen Shaw (Luke Evans), leaving him in a coma. Now, Owen’s older brother, Deckard Shaw (Jason Statham) is out seeking revenge by trying to kill Toretto and his crew one by one. With the help of a government official known as “Mr. Nobody” (Kurt Russell) and his revolutionary tracking technology, the whole gang must team up yet again in order to stop this high stakes act of vengeance.

As with all the films in this high octane series, the story for this movie is quite straightforward and full of plenty of action genre cliches. Having said that, the reason this franchise has been so successful over the years is because it is just so over the top and fun. Personally, I love that formula for a great time at the movies and Furious 7 is no different. The action scenes are completely ridiculous, yet so much fun to watch and loaded with mind blowing visual effects. It was awesome to see all of the returning stars back in their respective roles, with nice acting performances across the board. All of the new additions were great too, especially Jason Statham in his role as the villain. My only issue with the movie was limited screen time from Dwayne “The Rock” Johnson. Putting that aside, I had an absolute blast with Furious 7 and I think it’s one of the absolute best in the series.
Posted by Michelle Libby at 9:37 PM No comments:

Movie review of Get Hard (R) - by Daniel Kilgallon

Get Hard is a new comedy movie directed by Etan Cohen (not to be confused with Joel’s brother) and starring the hilarious duo of Will Ferrell and Kevin Hart. Heading into this film, it was “hard” not to be excited with two of the funniest guys working in Hollywood right now acting alongside each other in the movie. I am a huge fan of basically all of Will Ferrell’s movies, including: Anchorman: The Legend of Ron Burgundy, Step Brothers, The Other Guys and Elf, just to name a few. I would also describe myself as a Kevin Hart fan, although that is mostly due to his stand-up comedy work. As expected, these two comic geniuses delivered yet again, and Get Hard pretty much had me laughing out loud from start to finish.

James King (Will Ferrell) is a billionaire living in the San Francisco area of California, who managed to make his fortune by working as a wealthy hedge fund manager. Early on in the movie, he is arrested by the police for fraud and sentenced to ten years at the San Quentin State Prison. However, King is allowed a thirty day time period to ensure that all of his affairs are in order. In a desperate attempt to prepare himself for life in prison, King enlists the help of his car washer, Darnell Lewis (Kevin Hart), who does everything he can to help him toughen up a bit, hence “Get Hard”.

As I mentioned earlier, Get Hard kept me laughing for the majority of its runtime, and any comedy that can do that is a success in my mind. Will Ferrell and Kevin Hart were equally hilarious in their roles and I thought they had excellent chemistry together. No surprise, those two were definitely the driving point of this movie, however there were plenty other positives to this film. Like most movies of the genre, the story was nothing incredible, yet it was written well enough to keep things interesting throughout. Most of the jokes really worked for me and they were for the most part, clever and hilarious. That being said, I cannot recommend this movie to the light of heart as there is plenty of inappropriate, sometimes racist content. However if you can get past some offensive material, don't allow yourself to miss out on Get Hard; I can practically guarantee plenty of great laughs.
Posted by Michelle Libby at 11:14 PM No comments: