It’s April, 1945. Allies are making their final push in the European Theatre.  A battle-hardened Army Sergeant named Wardaddy (Brad Pitt) commands a Sherman tank and her five-man crew on a deadly mission behind enemy lines. Out-numbered and out-gunned, Wardaddy and his men face overwhelming odds in their heroic attempts to strike at the heart of Nazi Germany. It is here Fury begins. Unfortunately it is also where it ends.

The starring role by Brad Pitt along with additional credit as executive producer prompted my attendance and high anticipation for entertainment but to no avail.  He did not impress me; nor did the presence of other household names like Shia LaBeouf. The delivery of their lines seemed mechanical so sub sequentially actions that followed lacked in execution as well as impact. While it seems unlikely, perhaps if four of the five crew members had offered more credibility to their roles I might have taken more of an interest in their characters.

To this end, I present the fifth member of the crew and the real protagonist. His name is Norman (Logan Lerman) the rookie soldier thrust into Pitts platoon as a last minute replacement. His portrayal of a young unseasoned soldier shines. It is compelling and always convincing to the extent that everyone else just, well, simply disappears from the limelight. I recall a similar performance when he held the leading role in 2010’s Percy Jackson and the Olympians: The Lightening Thief.

As for the action sequences, there are a scenes of battle that are well executed and impressive visually. However I would have preferred, no expected, a greater number of them, especially coming from Director David Ayer whom you may remember gave us 2001s Fast and Furious and more recently 2012s End of Watch. Instead he opted to riddle the script with numerous underlying elements involving personality clashes in an attempt to solicit a sympathetic or emotional response from the viewer. I found this to be more of a distraction than a point of interest.

So what you have in the end is a film that struggles to identify and bring its point across. Perhaps my expectations were too high. What I did not anticipate was a rollercoaster ride. What I did get was a film that borders on mediocrity.

Posted by Michelle Libby at 6:25 PM No comments:


“She wasn’t aging well. Too thin, which wasn’t good for that kind of heart-shaped face, just left her eyes sunken, her forehead creased.” I love Laura Lippman’s style. In 23 words she gives us a complete picture of the character without once telling us what she looks like. After I’m Gone is Lippman’s new 331 page novel, published by Harper Collins in 2014.


Felix Brewer is a criminal; strip clubs, gambling - even some legitimate businesses - have made him a wealthy man. It all catches up with him and Felix faces five to ten in the penitentiary. He disappears. The girlfriend he leaves behind is heart-broken; his wife and three daughters are broke.

Ten years to the day after Brewer goes on the lam, girlfriend Julie disappears. The timing poses questions. Was there always a plan to meet? Had the gangster sent for the girlfriend, not the wife?  Bambi Brewer and her daughters are subjected—again—to speculation and intrigue in the press, rumor and gossip in social circles.

Fifteen years later the discovery of Julie’s body causes new social seismic tremors. Lippman leaves the bungled original investigation to imagination and picks up eleven years later. The case is taken on as a cold case by a taciturn mensch of an ex-cop, Sandy Sanchez. He seems like a guy who is playing out the final two minutes of his life by continually falling on the ball—but not because he’s ahead in the game. He is a widower and has an institutionalized son in his thirties. He gave up on the boy twenty-plus years ago. His past haunts him.

Sandy digs into the case and finds a Brewer family at sea without a helmsman; stumbling in dysfunction. Felix is still around like a picture on the wall, never changing, while those closest to him have grown, given birth and gotten old. The investigator works the old case; reads the old files; interviews the participants and spectators. In working cold cases, his premise is that the name of the perpetrator is always in the files—and there, it is found.

In After I’m Gone Lippman has given us a novel with all the elements of a good tale: Interesting characters, indulgent settings and a plotline with money and love and greed for both. Above all, this is a story about loss; it’s about very real, very human characters dealing with loss and incorporating the consequent sorrow into their lives.
Posted by Michelle Libby at 6:16 PM No comments:


Once again the silver screen has chosen to take yet another bite out of the pages of Bram Stokers Dracula. Unleashed as an origin story for the title character, the focus of Dracula Untold is however redirected away from the infamous 1897 novel. While there are similarities, this portrayal is based more on Vlad the Impaler. However that does not take away from the impact or the enjoyment of this production. And while I admit at first I was skeptical and apprehensive about seeing this film, that attitude would quickly change within the first 10 minutes. I was certainly sucked in.


Dracula Untold reveals the epic of Transylvanian prince Vlad III Țepeș whose period of peace is threatened by Sultan Mehmed II, who demands 1,000 of his principality's boys, including Vlad’s own son, Ingeras, to join his army. Art Parkinson’s performance as Ingeras was equal to his part in 2011s Game of Thrones. With Luke Evans as Vlad and Sarah Gadon (Amazing Spiderman 2) as Mirena his wife, there is more than enough talent and screen experience to pull off the dramatization of life changing challenges that lay ahead.

Facing threats to his kingdom and his family Vlad makes a deal with dangerous and deadly supernatural forces, A.K.A. Charles Dance, The Master Vampire. But those powers would not come without consequences. Burdened with the willpower to avoid succumbing to the darkness that is consuming him leads to a very tumultuous journey with surprising consequences. Not so surprising would be an insatiable desire for the taste of human blood that would lead him to embrace his destiny as the legendary vampire, Dracula.

Do not be fooled by the fact writers Matt Sazama and Burke Sharples have only one previous movie under their belts, nor the fact that this is the feature film debut for Director Gary Shore. From the beginning to the end the plot develops with accuracy and thickens with time, during which the characters are also brought to life. The timing of cinematography coupled with the insertion of sudden explosions of the soundtrack and special effects produce a striking visual that captures each critical moment. And they are plentiful. Count on it!

Posted by Michelle Libby at 9:50 PM No comments:


Move over Chucky, there's a new face in town! Her name is Annabelle. While her wrath is not Child's Play she will definitely mess with your head. Annabelle is a rare vintage doll, given to a extremely pregnant Mia played by, coincidentally another Annabelle, Wallis that is. Truth be told Annabelle's face is not all that new. It's showing a bit of wear left over from a previous engagement. 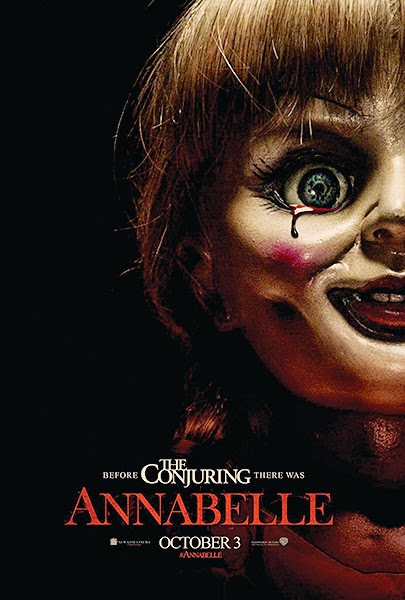 You see, while listed as a spin-off, this film is considered to be the prequel of 2013s The Conjuring which was also directed and produced by John R. Leonetti and James Wan respectively. Like The Conjuring, it is also based on the 1970s case “Annabelle: The Haunted Doll” as illustrated in the book Demonologist in which experienced paranormal investigators and preeminent experts Ed and Lorraine Warren tackle the potential connection and mystery surrounding a possessed raggedy Anne doll of the same name and the death of 7-year-old Annabelle Higgins.

In this adaptation, all seems normal until Mia receives what is thought to be the perfect gift from her husband played by Ward Horton. That same night the next door neighbors are brutally murdered by a cult and immediately after, Mia’s own home is invaded. The consequences are swift but well directed, choreographed and very believable with the element of surprise being reverberated by action as well as sound.

Traumatized by the ensuing mayhem and violence by the intruders they decide to move. But not before the realm for evil has been established. Blood and terror were not the only remnant left by the attack. An entity has been conjured that is beyond malevolent and pales in comparison to the brutal attack. With a sinister conduit to the damned established, escape seems impossible. One saving grace is the very caring and understanding Alfre Woodard (Twelve Years A Slave) who contributes her talents as Evelyn, a supportive new neighbor.

As I did not see The Conjuring I cannot make a valid comparison. However, I can say that just looking at Annabelle's creepy porcelain face was scary enough to get the idea. And if not for the believable well-executed experiences and fear of those associated with the underlying secret within Annabelle, I would not have been as captivated as I found myself.

Posted by Michelle Libby at 9:59 PM No comments:

Movie Review of "The Boxtrolls" - Review by Stephen Signor

Somewhere in the land of make believe there is a place aptly called Cheesebridge. Underneath this little city amid caverns and sewers reside creatures of the night. They are The Boxtrolls. In the shadows of darkness and with precarious caution these creepy trolls, adorning cardboard boxes, raid dumpsters and scourer for discarded mechanical parts. They also abduct the town’s cherished, prized assets; the children and the cheese. Or do they? The answer lies hidden among humorous dialog and scenes all of which will have viewers highly entertained regardless of their age.

Brought to us from the studio of Laika, which also gave us Coraline and Corpse Bride, The Boxtrolls brings back the lost art of three dimensional stop motion and CG (computer generation). While this is a hybrid animated feature film, the never-ending motion and action is seamless. This can also be attributed to the participation and efforts by co-director Graham Annable who also gave us Paranorman in 2012.

Based on Alan Snow's bestselling fantasy adventure novel Here Be Monsters, The Boxtrolls follows the adventures of a small boy voiced by Isaac Hempstead Wright, whose misfortune has taken him into the bowels of the underground. Forced into abandonment from his parents by the evil Archibald Snatcher (voiced by Academy Award winner Ben Kingsley) he is accepted by the subterranean dwellers as one of their own. It is here his identity becomes transformed and his loyalty revered. Or does it?

Above ground it is open season on boxtrolls. Speaking of open season, this just happens to be the title of a film also directed by Anthony Stacchi responsible for this gem. With the trolls fate up for grabs the young boy meets and is befriended by Winnie, whose convincing voice is expressed by Elle Fanning whom you may recall was Princess Aurora in the hit Maleficent. A little rich girl whose father, Lord Portley-Rind just happens to be a member of a coveted club of cheese connoisseurs and the city council, she is compelled to disclose something is amiss with these square corrugated clad monsters.

In the end don't be surprised if you go home and see cardboard boxes in a different light. Which brings me to one final note: Do not be in a rush to leave the theater when the credits begin to roll. All-be-it short, you will be pleasantly rewarded with additional footage.
Posted by Michelle Libby at 4:51 PM No comments: