How often do you walk into the movie theater and pay a pretty penny for you and your family to see a cinematic adventure when you know exactly how the movie is going to end?  Well, if you’re like me and the throngs of movie-goers that eagerly plodded in to watch “Captain Phillips”, that’s exactly what you did.
Just sit right back and you’ll hear a tale, a tale of a fateful trip… no wait… that was “Gilligan’s Island”. 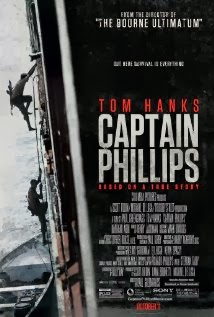 “Captain Phillips” is the film adaptation of the true story of Captain Richard Phillips, who was the skipper of the Maersk Alabama.  Phillips, wonderfully portrayed by Tom Hanks, is a normal guy that lives in Vermont who simply wants to do his job and go home.  He’s relatively new to the ship’s crew, so there’s not much of a working relationship.  After a short time out to sea, he learns of pirate activity off the Somalian coast, so they run drills, only to have the drills turn into the “real-deal”.

The Somalian pirates are an interesting group.  Initially, there are two boats that attempt to hijack the Alabama, but when Phillips and his crew outsmart them, only one returns.  When it does, it returns with the more ruthless and “intelligent” (using that word loosely) Abduwali Muse (played by newcomer Barkhad Abdi) who is the leader of the pirates and declares himself the “captain”.  After a game of cat and mouse between the crew and the pirates on the ship, it becomes evident that there is no way the pirates can actually take over the massive cargo ship.  Instead, they take Phillips and escape on a lifeboat.

(SPOILER ALERT…. IF YOU WERE ALIVE AND NOT UNDER A ROCK IN APRIL 2009, CONTINUE READING.  IF NOT, STOP READING HERE.)

The rest, shall we say is history.  The Navy SEALs show up and do what they do best.  Shoot bad guys in the head.

I enjoyed this movie tremendously.  I can’t remember the last time that I walked into a movie knowing what was going to happen in the end, yet still was captivated and on the edge of my seat wanting to know the exacts of how it was all going to go down.  The flow of the movie was good, and it seemed to move along pretty well for the two-plus hours.  I found that it only lagged for a short time during the lifeboat scene.  The only part of the movie that I really found fault with was the final scene when Phillips was being checked out by medical on the Navy ship.  Maybe it’s just Jeff being picky because I was a medic in the Army for a hundred years, but I’d like to think that they would’ve had an actual doctor looking at Phillips and not just a Navy Corpsman.  As for the PG-13 rating?  Warranted.  I would let my teenager watch this movie without hesitation, as the only terrible scene was when the SEALs were doing what SEALs do best.  As for allowing a 9-year-old kid to watch the movie?  Probably not the best idea.  I hear “Cloudy with a Chance of Meatballs” is great and is still playing.
Posted by Michelle Libby at 11:15 AM No comments:


I always enjoy a good mob movie, especially one that includes Robert De Niro.  So when I saw the trailer for “The Family” about 6 months ago, I was extremely excited at the chance to see one of the masters back in action.  My wife, on the other hand, was anxious to see what Michelle Pfeiffer had been doing since the movie “Dangerous Minds” …. (She doesn’t watch as many movies as me). 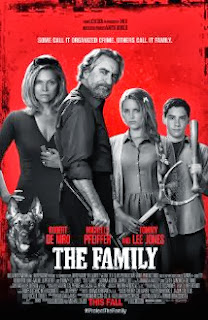 De Niro stars as mob boss Giovanni Maznoni, who has turned on his fellow mafia brethren in exchange for immunity from prosecution.  The well-connected mafia knows every inch of the United States, so Maznoni and family are sent off to Normandy, France under the witness protection program and assume new identities as the Blake family, with De Niro becoming Fred Blake.  The matriarch of the family is Pfeiffer, now Maggie, who just wants peanut butter and to fit in with the locals.  Their daughter, Belle (Dianna Agron) is a beautiful teenager who is struggling with becoming a woman.
Their son, Warren (John D’Leo), is quickly following in his father’s footsteps as a kid that is willing to take a hit for the greater good, and is extremely conniving.

The plot of the movie centered around the mob from New York getting wind of the Blake family being in the witness protection program in France and their pursuit of them.  The movie seemed to continue moving along quite well and didn’t drag.  It even got better when Tommy Lee Jones entered the picture as the FBI Special Agent in-Charge of the family’s security.  There were other sub-plots along the way, such as Belle’s love life and Fred’s problems with the plumbing of their house.  All pieces of the story that make the family relatable to normal people, just not in the way they handle their problems.

All in all, I thought this was a decent, well-done movie.  Don’t get me wrong, by no means is it an Oscar contender.  I’m a fan of movies like “Goodfellas”, “Donnie Brasco”, and shows like “The Soprano’s”.  I also like comedies.  In my humblest of opinions, this was a successful combination of the two genres.

When we were making the decision to go out that night, we thought briefly about taking our daughter in to see this movie.  Yes, it’s rated “R”, but given the fact that I’m retired from the Army, I can have some salty language myself from time to time, so we contemplated bringing her.  Let’s just say we’re glad we didn’t.  This was a pretty violent movie.  And it was the violence that the children were inflicting on each other that was the most troublesome.  In most movies that are rated “R”, you expect to see adults shooting each other, etc.  In this movie, kids were beating the tar out of each other.  Jeff’s parenting advice…. Leave the kids at home or send them into a different theater at Smitty’s for this one.
Posted by Michelle Libby at 11:39 PM No comments:


So, the long awaited sequel to a film that absolutely terrified me is here, but with sequels it's kind of a toss-up to whether or not it is going to be good. I'm here to tell you that this was a good sequel. James Wan, the director, has become very well known for his films over the past decade and his newest chapter in the Insidious franchise does not fall short. I honestly had to do a double take when I put two and two together and realized that the same man who directed and released The Conjuring not three months prior already had another film in theaters around the globe. I still hold The Conjuring to be the scariest film I've ever seen, but Insidious Chapter 2 doesn't need to be as scary, its chilling terrors aren't the only thing that carries the movie.


After the absolutely shocking and frightening conclusion to Insidious, we see a family undergoing the stress and fears at levels so incomparable when their son brings a demon into the house. Insidious Chapter 2 picks up after these events and the Lambert family is still trying to grasp the untimely horrors of what they just endured. It doesn't take long before we realize that something is still terribly wrong with this picture, and I say that metaphorically and literally.

The fact is everything was tied in so precisely into this sequel. If you are a fan of the original you are going to be grinning ear to ear in some of the films subtle yet ringing throwbacks to the original story of this family's first encounters. When I said that this movie is not as scary, as say, The Conjuring, don't be tuned out, for the film is deeper in the sense of just pure interest and excitement. The characters are what mainly shine. They are loveable and believable, even if one or two might seem a little untrustworthy. I did find myself shrinking into my seat at some tense scenes, and shielding my face ever so slightly when I knew someone was going to bite it. This film is smart as a whole and I think that is why I appreciated it as much as I did. This is no cheap imitation, go see this movie.
Posted by Michelle Libby at 3:40 PM No comments: